Home » The legendary South African rugby players of all time

The legendary South African rugby players of all time

Home » The legendary South African rugby players of all time

The legendary South African rugby players of all time 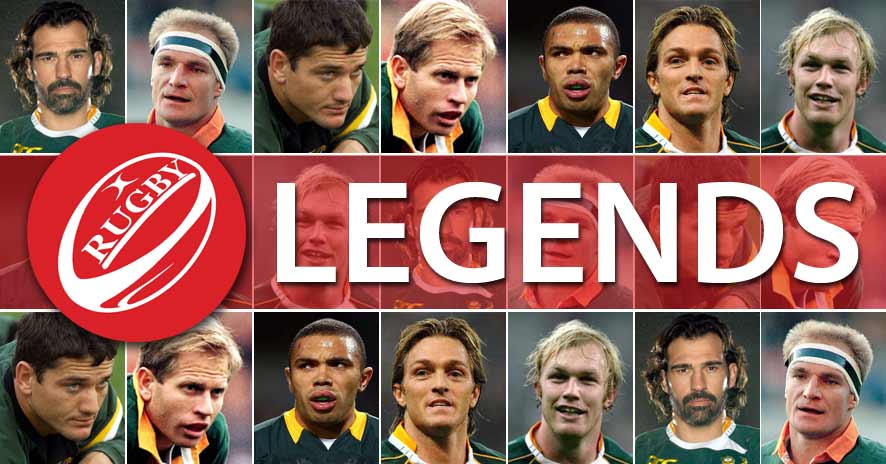 When you mention the topic ‘legendary South African rugby players’ it’s only natural a few scrums and one or two tackles might occur, because this is a highly controversial subject and one that every true rugby lover has a very strong opinion about! But we’re not shy to take it on the chin, so here are our thoughts – and feel free to let us know what yours are!

The most capped players

Victor Matfield is famous for being a ‘gladiator’ in the Springbok lineout, poaching countless opposition balls. He is considered one of the best locks in the world and in the 2007 World Cup final, his formidable presence terrorised the English lineout, earning him the IRB (International Rugby Board) player of the Rugby World Cup.

With 124 Springbok caps to his name, Bryan Habana is the most capped player after Victor Matfield. He was considered the fastest player in world rugby and is renowned for being the South African with the most number of tries at 67, which is almost double the amount of second placed Joost van der Westhuizen.

Percy Montgomery is famous for scoring a try in every Test. His accurate goal kicking resulted in many Test victories. On the 17 June 2006 against Scotland, he became the first Springbok player to reach 600 points in his Test career and in his second 2007 Rugby World Cup pool match against England, he became the first Springbok to score 800 Test points. When he retired in 2008, he held the all-time records for both caps and points for the Springboks.

The hall of fame

Joost van der Westhuizen first started attracting attention as a Blue Bulls scrumhalf. He made 89 appearances in test matches, scoring 38 tries, and participated in three Rugby World Cups – including the infamous 1995 tournament, which was won by South Africa. He first captained the South African team in 1999 and in November 2001, he became the first person to play one hundred matches for the Springboks. He was inducted into the International Rugby Hall of Fame in 2007 and later into the World Rugby Hall of Fame

Francois Pienaar won 29 international caps for the Springboks, all of them as captain and he is renowned for leading South Africa to victory in the 1995 Rugby World Cup. During the post-match presentation, the world will always remember the iconic image of Nelson Mandela wearing a Springbok jersey, bearing Francois’s number before shaking his hand and presenting him with the William Webb Ellis Cup.

Due to the sporting boycott during apartheid, Naas Botha had only a few Tests to show his brilliance to the world but he made such an impression that New Zealand named him as one of 1981’s players of the year. He was renowned for his extremely accurate (left-and-right-footed) kicking and remained the highest points scorer in Springbok rugby history with a points total of 312, until Percy Montgomery surpassed his tally.