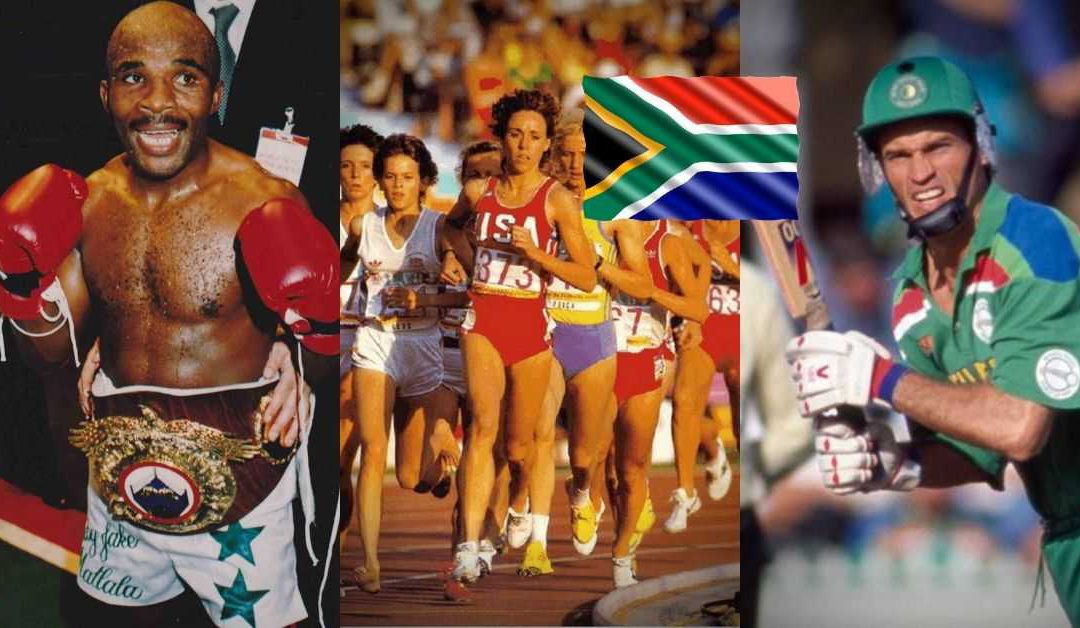 One thing we’re certainly not short on in South Africa is sporting talent. We’ve got famous South African sportspeople by the bucket load! Let’s take a look at some of the most memorable and remarkable sports stars to wear our national colours with pride.

Zola Pieterse, née Budd; is a middle-distance and long-distance runner that competed under the British flag at the 1984 Olympics and then under the South African flag in 1992, both times in the 3000 metre race. Although it was unratified in 1984, she broke the world record for a second time in the women’s 5000 metre race and is also a double winner at the World Cross Country Championships. What makes her so special? Most of her training and racing took place barefoot and her mile personal best time of 4:17.57 in 1985, still stands as the British record.

Bruce Fordyce, although born in Hong Kong, is a South African marathon and ultramarathon athlete. He is best known for winning the Comrades Marathon race nine times, eight of which were consecutive wins. He also won the London to Brighton Marathon three years in a row.

“Baby Jake” Jacob Matlala was a South African boxer and junior flyweight champion. At a height of 1.47 meters, Matlala was the shortest boxing world champion in history. With a total of 68 fights (53 wins and 2 draws), under his belt, he collected four world champion titles and presented his WBU belt to Nelson Mandela after his fight against Juan Herrera.

Paul Adams is a left-arm unorthodox spin bowler with a unique bowling action, featuring in the Test and ODI squads for the national team sporadically since the 1990s, taking a total of 412 wickets.

Kepler Wessels is a South African-Australian cricket commentator and former cricketer who has had the unique opportunity to captain the South African side after playing 24 Tests for the Australian side. He was a left-handed opening batsman, but now that he’s retired, he’s packed in the cricket gear and turned to competing in lawn bowls instead!

Daryl Impey is a South African road cyclist currently riding for UCI WorldTeam Mitchelton–Scott. He is a renowned an all-rounder who shines on the tough uphill sprints and a two-time winner of the Tour Down Under – the only competitor to have won the race in consecutive years. A machine on two wheels, Impey has won the South African National Road Race Championships twice and is an eight-time winner of the South African National Time Trial Championships, including seven consecutive titles between 2013 and 2019.

Gary Player is a retired professional golfer. Undoubtedly one of the greatest golfing talents out there, he has won nine major championships on the regular tour and nine major championships on the Champions Tour. At the tender age of 29 he was the first non-American to achieve the career Grand Slam – winning all four majors. During his career he’s scooped 163 tournament victories on six continents through seven decades, which earned his place in the World Golf Hall of Fame in 1974.

His passion for golf shows in his talent as an acclaimed golf course architect with more than 400 design projects on five continents throughout the world, and the penning of more than 36 books on golf.

Ernie Els is a South African professional golfer nicknamed “The Big Easy” on account of his larger-than-life stature of 1.91 metres in height, combined with his fluid, easy swing style. With 71 career victories, including four major championships, he is one of only six golfers to win both the U.S. Open and The Open Championship, twice. When not swinging clubs, he is a winemaker and he runs a golf course design business and a charitable foundation nurturing golf talent in underprivileged youth.

Francois Pienaar is a retired Springbok who played flanker, winning 29 international caps as captain of the South African squad. He won the hearts of the nation by leading the Springboks to victory in the 1995 Rugby World Cup.

Theophilus “Doctor” Khumalo is a retired South African soccer player, sometimes also known as “16 valve”, for his turbo power He is most beloved for being a star midfielder for Kaizer Chiefs and Bafana Bafana.

“Benni” McCarthy is a South African coach and former footballer.  He is Bafana Bafana’s all-time top scorer with 31 goals and is also the only South African sportsperson to have won the UEFA Champions League, playing with Porto in 2003–04.

Lucas Valeriu Radebe is a South African former professional footballer who played as a centre back. He started his career with Kaizer Chiefs, transferred to Leeds United and played 256 matches for his Yorkshire team. He was called “The Chief” as a tribute to his first team, and a nod to his captaincy of Leeds United and Bafana Bafana.

Natalie du Toit is a South African swimmer best known for her gold medal performance at the 2004 Paralympic Games and the Commonwealth Games. She was one of two Paralympians to participate in the 2008 Summer Olympics in Beijing and only the third amputee ever to qualify for the Olympics.

Chad le Clos, is a South African competitive swimmer who is an Olympic, World and Commonwealth Games champion as well as the Commonwealth record holder in the 50 and 100-metre butterfly. His parents must have an impressive trophy cabinet in their living room, because he won gold in the 200m butterfly and silver in the 100m butterfly in the 2012 London Olympics, plus silver medals in the 200m freestyle and 100m butterfly in the 2016 Summer Olympics to go along with his five medals from the 2010 Singapore Summer Youth Olympics. In case that wasn’t enough, he’s also won the Overall Swimming World Cup four times and in 2018, he achieved three gold medals in the 50m, 100m and 200m butterfly events at the Commonwealth Games.

We go the extra mile. At FinGlobal we’re capable of performance where it matters most for our clients, delivering fast, efficient, seamless financial emigration services and meeting all their cross-border financial requirements, from tax refunds to retirement annuity withdrawals, quickly and professionally.

Choosing to work with FinGlobal means you’ll cross the finish line and have your money faster. All of our services can be rendered remotely – we take care of all the paperwork, all you have to do is sign, approve and track your request through our convenient online portal.

From start to finish, we’ll handle every step of your financial emigration, and the international transfer of your funds to your new home abroad. Interested in finding out more about our services?

Get your FREE and no obligation financial emigration quote!