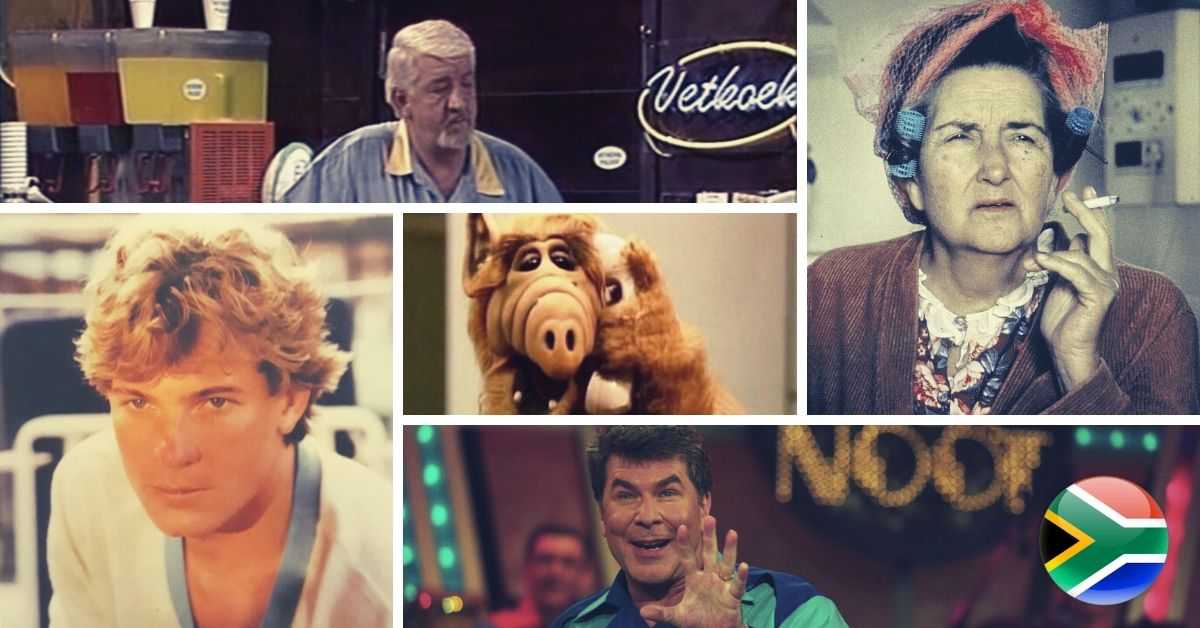 Growing up in South Africa was made all the more enjoyable with the plethora favourite TV shows made available by the SABC. As kids, afternoons would be spent running around in the garden, followed by a hot bath, delectable dinner and an evening ogling firm favourite SA TV shows. If you grew up in SA, you probably have fond memories of all the SABC old TV series. Some of them deeply engraved in your mind would be old South African TV shows for sure, but then there were others too, such as the ever-popular MacGyver series!

Of course, television only made its way to South Africa in 1976 and the country had a lot to catch up on in terms of TV shows and sitcoms.

If you’re missing home just a tad and wish to take a stroll down memory lane, you have come to just the place. We’re about to transport you right back to the good old days…where you snuggled up on the couch with your parents and siblings and got a few good hours of telly in before bed! Let’s remember some of the SABC old TV series together…

MacGyver was a series that ran from 1985 to 1991 and won the hearts of all South Africans; young, old, male and female. It didn’t matter who you were, on MacGyver night, you dropped what you were doing, raced to the comfiest spot in the lounge and got your weekly fix of Lucas Till in his star role as Angus MacGyver. MacGyver, a former special-ops agent, entertained the masses with his clever ways of tricking drug lords and baddies, subsequently bringing them to justice with little to no brute force. For those who have a bit of longing for the days gone by, there’s a revamped version of the 80’s series that was released in 2020, now available online and on Mnet.

The creator of Egoli, Franz Marx, did everything right when he brought out his brainchild, Egoli, to life in SA. The name, which is Zulu, is the name known locally in SA for Johannesburg. Egoli lasted for 18 whopping seasons and was somewhat a “soapy” by South African standards. It wasn’t in short supply either – it actually aired daily during the week.  It was originally released on the 6th of April 1992 and when that very first episode aired, the entire nation waited with baited breath. There had been a lot of talk of a new local series to hit the screens. Who knew that Egoli would become one of the renowned SABC old TV series remembered today?! Egoli involved all the scandal, intrigue, sex, and drama of a good soapy and featured around 3 main families living in Gauteng; the Willemse family, the Naude family, and the Vorster family.  All of the old seasons are available to view on ShowMax.

In 2005, one of South Africa’s most popular old South African TV series hit the screens…and it stuck around for 14 long seasons! All eyes were on Mnet every week, just to find out what happened next in the Binnerland Kliniek, a private hospital in Pretoria. The entire story was focused on the kliniek (which is a clinic in English) and those who worked there and were treated there. Just like Egoli, this was a South African drama soapy.

Ballade Vir ‘n Enkeling is another popular old Afrikaans TV series. It was so popular that it was eventually turned into a big screen film in 2015. The series ran from 1987 to 1993 and truly drew people in with its raw South African acting talent, gripping story line and enticing soundtrack. It features the story of a famous author who seems to disappear into thin air. A journalist takes interest in the story and seeks to bring it to a chilling resolution – which is exactly what happens. The story was told over 2 seasons of exceptional mystery and was jam packed with action, suspense, betrayal, danger, and love. It was hard not to get sucked into this one. You might even enjoy watching this one again!

When Orkney Snork Nie was first released, or should we say unleashed, on the South African public in 1989, no one could quite know that they were in for 52 action-packed episodes worthy of rip roaring laughter and intrigue. As far as old South African TV series goes, Orkney Snorkie is one for the books! The sitcom’s name, which directly translates to “Orkney Doesn’t Snore” in English, is all about the tails of an Afrikaans town that hustles and bustles, leaving no time for sleepiness. There’s always something happening in Orkney and the entire SA population was there every week, waiting to watch it all in action.

Die Sonkring was a very popular old Afrikaans TV series. It was a series filled with mystery, drama and intrigue. Once you started watching, you just couldn’t stop… you had to know what happened next. The first release of Die Sonkring was in 1991 and featured local stars, Anna-Mart van der Merwe and Trudie Taljaard. It was aired for 6 full seasons with 139 episodes. The story line is sure to have been one of your favourites if you were one of those who were hooked on the show. It features 3 Matric students visiting a fortune teller together. The fortune teller tells them that all of them will experience a lot of tragedy as a result of one of them; Maryna. It’s mostly shrugged off, but the years that follow show the fortune teller’s words coming true. Even now, you’re dying to know more, aren’t you?

The good news for those who remember these shows and want to watch them again is that many are available on Showmax.com as well as Netflix.com. There’s no reason to think back and revel in the memories…relive them! Watch them all again and share the experience with your new friends and colleagues. While you’re thinking back on the good old days in South Africa, you’ve probably sparked your memory about your current tax emigration and retirement annuity situation since you left the country’s shores. If you are keen to get your tax emigration sorted out and gain access to your South African retirement annuity, the professional team of consultants at FinGlobal can assist. We provide premier guidance and advice to many South African expats abroad…and we can help you too. All you have to do is contact us.