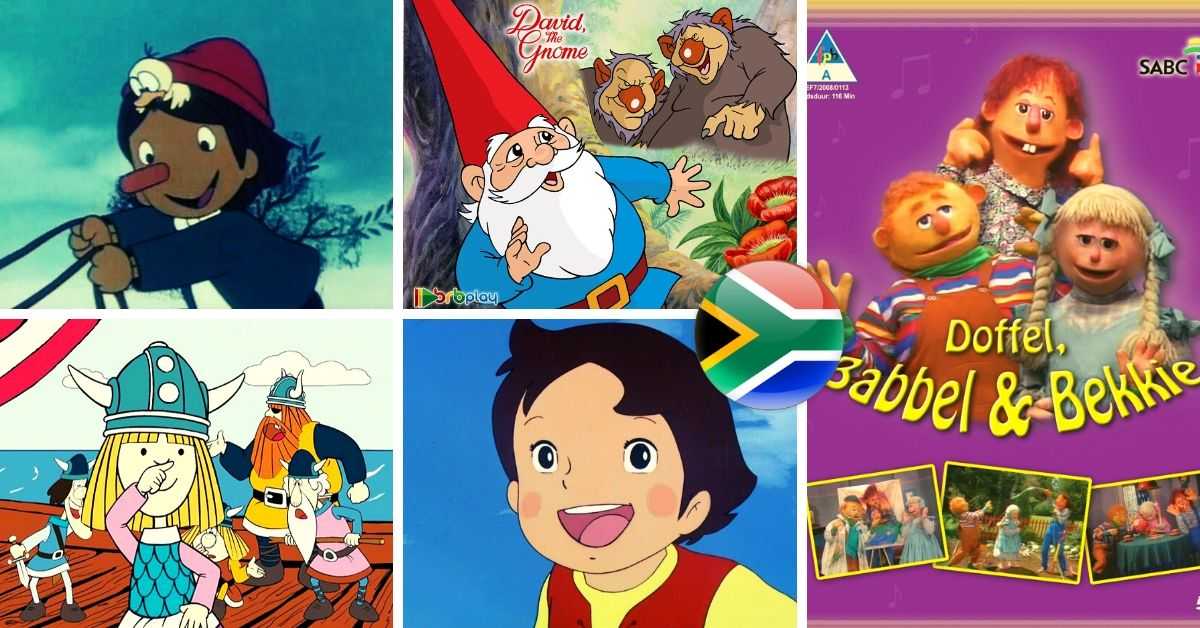 It all really began in 1976 when television made its way to South Africa – many years (decades even) after the rest of the world. And then it began…a plethora of kids TV shows were unleashed on South Africa and they had the nation mesmerized. Who can forget the antics of Liewe Heksie, Haas Das, Trompie, Miena Moo, Dawie Die Kabouter, or Pumpkin Patch? Certainly not 80s born South African kids, that’s for sure!

By 1977, South African had a whopping 1.5 million viewership even though the country only enjoyed 37 hours of broadcasting per week. That was enough to get the kids of SA their fix. And now as adults, TV show jingles and old memories bring a smile to the face and warmth to the heart.

In a doff of the hat to Old South African kids TV shows of years gone by, we have dug up a few of the country’s old firm favourites. While we can’t feature all of the old favourites, let’s take a quick walk down memory lane with a few of the top choices:

This one stole the heart of many South Africans with its lovable characters; Woofles the security dog, Freckles and Speckles the puppets, Uncle Bill the mayor, and Laurel the teacher. The stories featured everyday life for a typical South African. Ever so enjoyable!

Theme song: for old time’s sake, take a listen to Die Swart Kat theme song track here. It is sure to get your head bopping and the old memories flooding!

This particular kids TV program grabbed the attention of most pre-teens from the age of 9 to 12. You will remember the story feature Borrie Veldt who was a normal kid by day and a super-secret crime fighter by night. What made him such a hero to SA kids was that Borrie’s dad was a detective and Borrie was solving crimes that his dad was otherwise unable to. By all accounts, Borrie was living the South African kids’ dream.

This kids TV show was taken off the air in 1996, but prior to that, it was one of SA’s longest ever running television shows. It featured the adventures and antics of fun and interesting characters; Sarel Seemonster, Bennie Boekwurm, and Karel Kraai. For a real blast from the past; check out this clip from 1980.

You might remember that Liewe Heksie was first a witch mentioned in Afrikaans radio stories. As her popularity grew, the success of a television show starring the seemingly absent-minded witch became a must. The television series started in 1978 and featured stories of the witch saving the day, purely by accident. It was a feel-good kids program and one that still pops into the memories of South African kids from the 80s.

Dawie die Kabouter is probably the top of the list of most SA kid’s favourites from the 80s. An interesting point about this particular kid’s series is that it was actually a Spanish animated TV series called David, el Gnomo (David the Gnome) based on kids’ books called “Gnomes” and “The Secret Book of Gnomes”. It was written by a Dutch author called Wil Huygen and in SA, was dubbed into English for television airing.

Interster, which translates in English to Inter-Star was an innovative South African television series aimed at kids. If you were a fan of the show, then you won’t need to be told that it was only around for 2 short seasons…much to the disappointment of thousands of kids across SA. The science fiction puppet show featured a secret planetary defence agency that operated in Cape Town and pretended to be an interstellar shipping company. The show was a clever way of uncovering the political issues surrounding Apartheid in SA and featured an evil villain called Prince Karnati and his evil sidekick.

Check out an episode of Interster here.

If you were one of the SA kids sitting close to the television set to watch the very first programme ever aired on South African television. The show was quite politically satirical and appealed to both adults and children. The show featured a rabbit reading the news, in SABC news legend’s voice, Riaan Cruywagen. Now you know why Riaan is such a legend! Need a blast from the past to make your day? Check out an episode of Haas Das se Nuuskus here.

There’s nothing quite like a good old blast from the past, is there? When thinking back to your life in SA, it should be all about memories of good times and traditions shared. Unfortunately, some expats of SA have stresses and challenges to face instead, such as their tax and financial emigration. If you’re faced with the red tape that often comes with financial and tax emigration processing when leaving SA, turn to the helpful advice and guidance of FinGlobal. Our team of consultants has 10 years of experience in the field and we pride ourselves on providing premier advice and guidance to SA expats abroad or looking to move abroad. If you would like more information, contact us at your earliest convenience.

Get your FREE and No Obligation Financial Emigration quote!