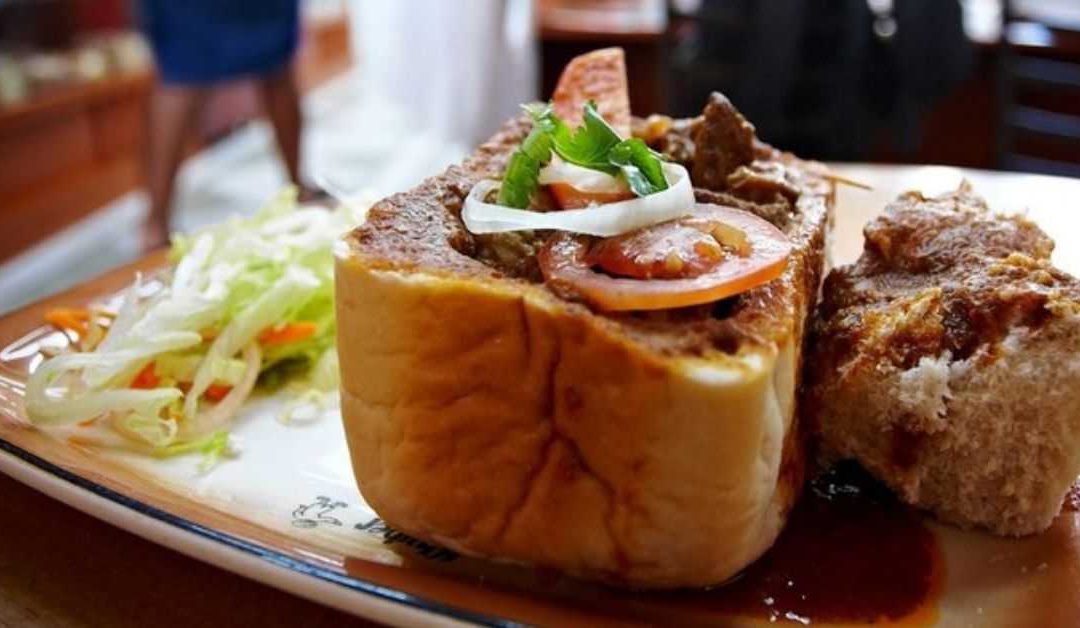 If you are ever looking up traditional South African meals, you are bound to arrive at a reference to Bunny Chow. Bunny Chow is a traditional Durban dish and its origins are as hotly debated as some its spicy ingredients. For more about this versatile delicious dish and Bunny Chow recipes that will get your mouth watering, read on.

The history of Bunny Chow

Bunny Chow is essentially a hollowed out loaf of white bread, filled with a delicious filling. It’s a dish that is rumoured to have become popular amongst indentured Indian labourers who were brought out to work in Natal’s sugarcane fields. Rumour has it that the word ‘bunny’ comes from the Indian word ‘bania’ which is the cast of the Indian businessmen who sold this food to the labourers, and the word ‘chow’ is South African slang for food.

Another theory is that Bunny Chow was created for the Indian caddies working at the Royal Durban Golf Course. As Durban’s central business district was too far away for the caddies to pop out and grab a quick meal at lunchtime, their friends brought them back their curry in hollowed-out bread and the bunny chow was created.

Some people however believe that the word Bunny Chow is a combination of the word bun and achar, a spicy Indian/Malay relish. Over the years, the theory is that “bun achar” became Bunny Chow”

The way to eat Bunny Chow

Bunny Chow is the ideal take-way food and it’s eaten with the hands. The idea is to start with the scooped out bread at the top and finish off with the rich gravy at the bottom. The fillings for Bunny Chow vary from curried meat to oil-soaked chips, called ‘slap’ (floppy) chips. This ‘Chip Chow’ is a favourite high-energy meal eaten by Durban’s surfers between wave sets.

If you are inspired enough to create your own Bunny Chow recipe, you might like to enter the Bunny Chow Barometer, a competition held in September in Durban on the south bank of the Umgeni River. Here Bunny Chow chefs compete for the title of the best Bunny Chow maker.

To create your own bunny chow wherever you are living, here is some inspiration.

It is thought that the original Bunny Chows were more vegetarian-based than meat-based, as the most popular dish at the time amongst the Indian labourers was roti and beans. This vegetarian Bunny Chow has its roots in the original recipe.

This recipe has been updated to share it amongst a few people. But if you prefer to, replace the bread rolls with a large loaf of white bread.

FinGlobal specialise in financial emigration, accessing your South Africans retirement annuity and tailor-made tax solutions for South African expats. Our professional guidance and advice will assist you to successfully financially emgirate in a simplified and supportive process. With 60 000 clients in more than 105 countries whom we have assisted, give us a call today.