Home » How Team Dimension Data is changing lives, one bicycle at a time.

How Team Dimension Data is changing lives, one bicycle at a time. 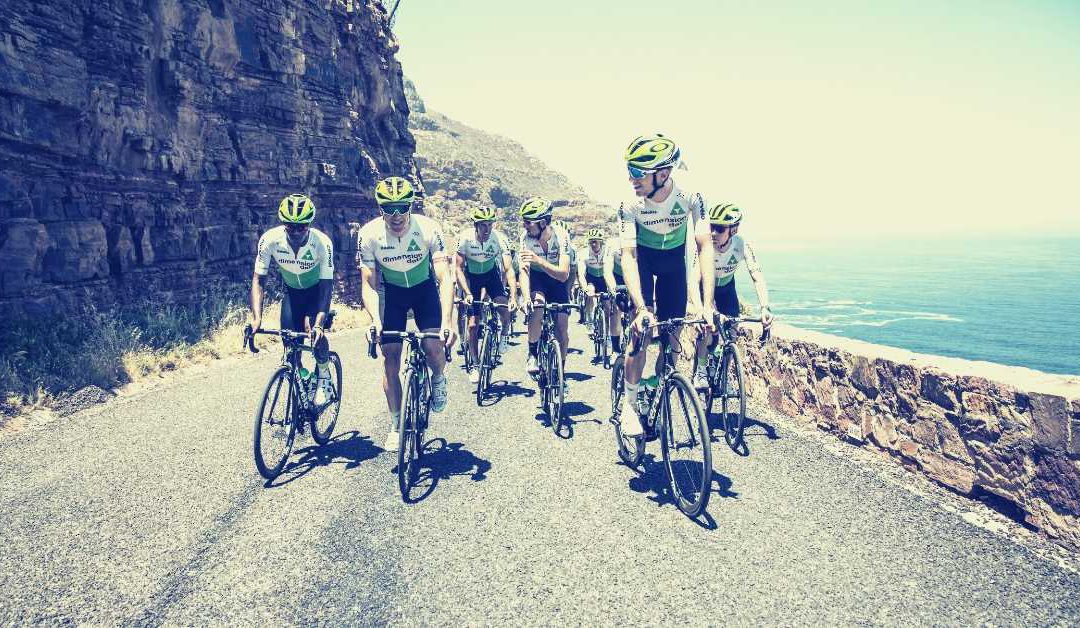 Team Dimension Data for Qhubeka is a World Tour South African cycling team that is sponsored by Dimension Data Holdings. The team rides for Qhubeka, a charity programme that is dedicated to supplying bicycles to people in need in Southern Africa.

Team Dimension Data for Qhubeka was founded in 2007 and have worked their way up from a pro-continental team to riding on the WorldTour. Today they have bases in South Africa and Italy and their reputation as ‘Africa’s Team’ is due to their commitment to help African cyclists reach the world stage of cycling. Their primary focus is to raise funds for the Qhubeka charity.

With rides in the biggest races now assured thanks to its newly- appointed WorldTour status, the team has further bolstered its firepower with the signing of British sprinter Mark Cavendish. Cavendish has at his disposal one of the finest lead-out trains that will include key lieutenants Bernhard Eisel (Austrian) and Mark Renshaw (Australia).Team Dimension Data for Qhubeka has also confirmed the significant contract renewals of Reinardt Janse van Rensburg (South Africa), Ben King(USA) and Edvald Boasson Hagen(Norway),Tyler Farrar (USA) and British rider Steve Cummings who all have committed to the team for 2019.

Rest of the team:

Qhubeka is a Nguni word that means “to progress” and reflects the organisation’s belief that bicycles change lives by mobilising people, giving them access to education, healthcare and economic opportunity. Team Dimension Data for Qhubeka, firmly supports this belief and has a mission to fund 5000 bicycles for people through Qhubeka.

How one bicycle changes a life

In Africa, a lack of transport means that children and adults have to walk long distances to get to work, school, jobs and clinics. In South Africa, over 12 million of the country’s 16 million walk more than two hours to school and two hours back. A Qhubeka Bicycle radically changes this, reducing their transport time by up to 75 percent.

With a bicycle, a child or an adult can travel four times faster than if they were walking. For every 16km travelled, a bicycle saves 3 hours of valuable time. In addition, a bicycle increases a child’s carrying capacity by five times and financially saves people the money they would normally have to spend on public transport.

In 2018, Team Dimension Data has committed to funding 5000 bicycles for Qhubeka. They strongly urge everyone to fund Qhubeka’s bicycles as every little bit helps – even if you just donate a few rands/dollars or euros.

Some of Africa’s most talented riders wear Team Dimension Data for Qhubeka’s colours in 2018, with two-times Tour de France top 10 Finisher, Louis Meintjies, spearheading the team. The team wholeheartedly believe in the #BicyclesChangeLives campaign and it remains a driving force behind their success.

Refer FinGlobal and celebrate with a 5 percent commission

Cheer for Team Dimension Data during their last UCI WorldTour Event: 16 – 21 October Tour of Guangxi -China. And remember that you can refer FinGlobal’s services to other South African living abroad. If one of your referrals signs up for our services, you will immediately earn a 5 percent commission on your referral!

The FinGlobal referral programme is free and requires very little effort. All you have to do is share our ready-made adverts on your social media channels. It’s as easy as that! We’ll keep track of all your referrals and you’ll immediately earn your commission once your referral becomes a FinGlobal client.  Find out how you can become a FinGlobal Ambassador today!