Growing Up In South Africa In The 70s and 80s 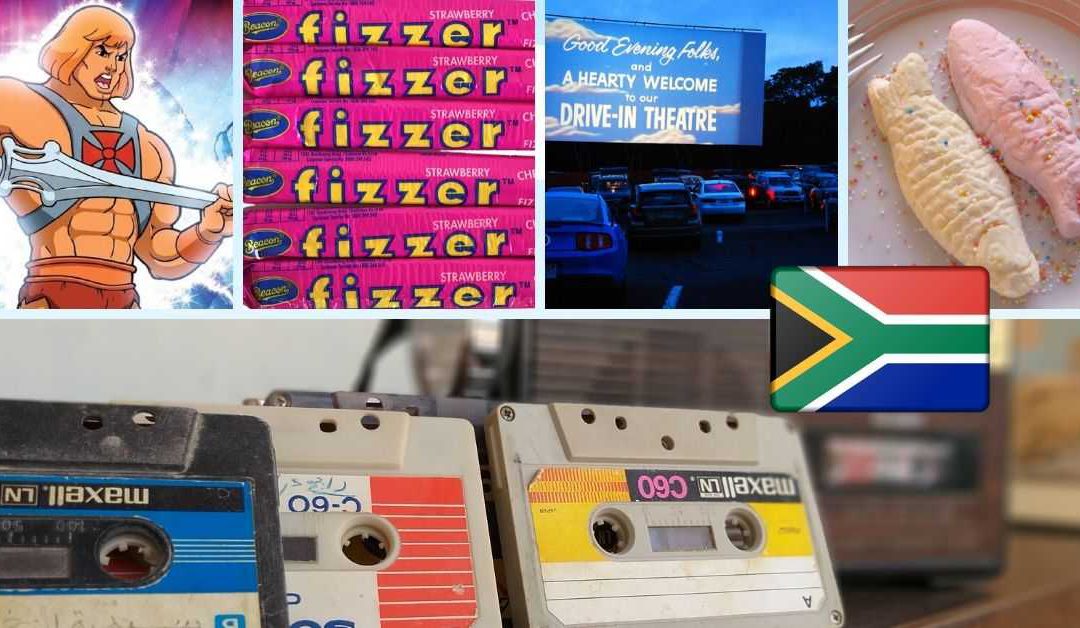 If you’re a product of growing up in South Africa in the 70s or 80s, you are part of the last tech-free generation. It was a much simpler time before smartphones, tablets and gaming consoles. There was no Internet and there were no 24/7 cartoon channels because television was barely a blip on the radar. As adults now, we rarely think back on our childhoods, except to lament the fact that “kids these days don’t have it like we did back then”. In our day, children had the time and space to be children and spent more time outdoors than in.

Despite it being a difficult time, characterised by political struggle, racial inequality and civil unrest, as children we were resilient and adaptable, snatching enjoyment wherever we could, and making the most of what we had. What was it like growing up in South Africa before we switched over to the Year 2000? Today’s kids would more than likely scoff and roll their eyes in disdain at the idea of the analogue South African childhood, but we know we had it good. Sadly, today’s generation will never know how good.

The typical South African childhood: a trip down memory lane

Back in the day, parents felt safer letting their children play unsupervised in the street than they would today. On weekends, after school and during school holidays, our parents would chase us out of the house early in the morning with instructions to return later for lunch or even later when the street lights came on. We rode our bikes all over the neighbourhood, from one friend’s house to another, recruiting a gang of children to play. Whether it was cricket, soccer or a game of Red Rover, Open Gates or toktokkie, we roamed the streets freely without worry. Our parents didn’t have to arrange playdates for us. All we had to do was run over to a neighbour’s house, knock on the door and ask if our friends could come over.

There weren’t many malls around in those days, and there certainly wasn’t online shopping or food delivery services. We walked to the corner cafe (said: kaf-ee), often barefoot, clutching a fistful of sweaty coins (who remembers two Rand notes!?)  sent by our mothers to buy bread or cigarettes. If we were lucky, the change was ours to spend and it was always a tough choice between feeding those coins to the arcade games machines or spending it on sweets. Many happy hours were whiled away in front of the arcade games machines, playing Street Fighter, Mortal Kombat, Pac-Man, Double Dragon and we were the joystick masters.

For entertainment we had the radio before television became mainstream in the 90s. We listened to serials and used our imaginations. We read books and enjoyed comics and annuals. We were raised on television shows with a heavy focus on morality. We learned the difference between right and wrong from shows like Bravestarr, Captain Planet, Thundercats, He-Man, and we learned friendship from the Gummi Bears, Care Bears, and My Little Pony. In the early 90s, we got the first video games – cartridge consoles that plugged into the AV ports – one cable for sound, one for audio. We jolled hard with Super Mario, Ice Climber, Island Boy, Circus Circus, Paper Boy, Space Invaders, Elevator Action, and Olympic Games.

As a rare treat, we would get to go to the drive-in with our parents. We’d have supper at home beforehand, bath and dress in our pj’s, pile in the backseat and boot of the car (this was a time before safety seats and seat belts for children) for the Saturday night matinee, which was usually a double film screening. We’d park in front of the big screen, snuggled in our blankets, eyes transfixed on the movie, with the audio playing through the radio that got hung on the car window.

We had M-Net Open Time during the week, and Disney’s Family Hour on Sunday evenings, which was a treat before Carte Blanche. Only the wealthy had M-Net, the rest of us had the three SABC channels, and eventually eTV. We were hooked on shows like Full House, The Fresh Prince of Bel-Air, The Simpsons, Dinosaurs, Murder She Wrote, Magnum PI, Air Wolf, MacGuyver, the A-Team, and we had Riaan Cruywagen on the news.

We did our school projects using the big set of Encyclopedia Britannica, and all assignments were hand-written. If our school library didn’t have the information we needed, we’d go to the public library. We didn’t have much homework, and school was a lot less demanding back then. There were no jam-packed extramural schedules, kids had time to be kids.

The many flavours of growing up in South Africa

Those coins that didn’t disappear down the gullet of the arcade machines at the corner cafe were spent on sweets and other South African childhood delicacies. It was a time before nut allergies and gluten intolerances and there were no Pinterest-worthy birthday parties. Instead, we had Musical Chairs, Pass-the-Parcel, a couple bowls of Flings, Cheese Curls, Fizzers, Smarties, and a cake and called it a successful birthday party.

We broke our teeth on Wilson’s toffees, and spent hours blowing bubbles with Wick’s bubblegum sticks (the grape flavour was the best!) and pigged out on Smarties (there were even blue ones, before colourants became problematic), Chomps and apricot balls. We had gobstoppers, Fizzers, Fizz-Pops and Dirkie condensed milk tubes. Nut Puffs and Sugus, sherbet with feet-shaped lollipops for dipping and we bought our fizzy drinks in 1.25L bottles, which we redeemed for a deposit at the corner cafe, which was spent buying even more sweets. Like mallow fish and mice, funny faces and long, black liquorice laces. We learned everything there was to know from the inside of a Chappies wrapper, which was the source of all trivia before the advent of the Google machine.

We feasted on slap tjips from the corner cafe, enjoyed piping hot out of newspaper and swimming in vinegar and tomato sauce that stained your fingers red. We were also sustained by peanut butter and jam sandwiches, made from thick cut bread. Chip rolls were a staple in our diets – usually Simba chips on a fresh white bread roll. This was a time before listeriosis, and polony was considered a food group in most South African households. Strawberry Pops, Rice Krispies (the REAL snap, crackle and pop, not the hot air that passes for puffed rice cereal these days), Cocoa Pops, Frosted Flakes (good old Tony the Tiger….”they’re grrrrrreat!”) and Corn Flakes were to be eaten at any time of day during the school holidays, and the gaps in between meals were filled with whatever fruit we could scavenge around the neighbourhood – mangos, mulberries, gooseberries, sour cherries, loquats, and sugar cane sticks. Honestly? There was little better in summer than a fresh sugar cane stick to chew on!

Takeaways were rare (our parents simply didn’t have the money for it) and restaurants in those days didn’t have playgrounds or childminders. Going to a restaurant meant it was someone’s birthday, or there was something to celebrate. If it was a birthday, chances are you were going to the Spur and you would get a sparkler in a Chico the Clown ice cream and a cringeworthy performance of the birthday song from the waiters.

The many seasons of the South African childhood

Summers were for braais and swimming. Everyone made friends with the kids with the swimming pool in their backyards, or scavenged coins from the couch to visit the municipal swimming pool. If you had no access to a pool, a sprinkler would do! Before a thunderstorm, our houses would be swarmed by flying ants and we’d spend ages chasing them. We hunted for silkworms, we played Stalk the Lantern, and camped in the garden with our friends in makeshift tents. We climbed trees, jumped fences, caught tadpoles and frogs in the river when the weather was hot and walked to school across the frosted grass in winter.

Growing up in South Africa as the crossover generation

Despite the questionable fashion and hair choices that came out of the 70s and 80s, growing up in South Africa was an experience second-to-none. Falling largely in the Xennials generation, we are the older millennials, classified as the cross-over generation – because we remember a time before technology, and yet we were the first to learn it.

We learned how to work the VCR, how to programme the microwave and remember what it was like to connect to the Internet through a shrieking dial-up modem. (Remember Telkom’s R7 Call-More time on the weekend was used for connecting to the Internet?) We were the last to use cassette players and we were there for the transition from CDs to MP3. Born roughly between 1975 and 1985, Xennials remember landline phones and a time before texting. There was no Facebook or Twitter in the 70s, 80s or 90s and it would only be in the late 00s that social media would connect the planet in such a big, attention-seeking way, except back then, we called it Web 2.0.

No matter which generation you grew up in, or where in South Africa you’re from – one thing is for sure: those were the days.

Whether you consider yourself a Generation X, Xennial, a Millennial or you’re part of Gen Y, or even Gen Z, if you spent your childhood in South Africa, we’re here for you. FinGlobal offers top notch financial emigration services to South Africans all over the globe, and we’re ready to help you with whatever you need. Whether it’s cashing in your retirement policies and transferring the proceeds to start a new life abroad, or you need a hand with a tax clearance certificate or a foreign exchange transaction – we’ve got it all covered.

Take a look at what some of our clients had to say about our financial services for South African expats, and then let us call you back for a free and no obligation consultation and quote.