Home » The difference between rugby, Australian football and American football

The difference between rugby, Australian football and American football

Home » The difference between rugby, Australian football and American football

The difference between rugby, Australian football and American football 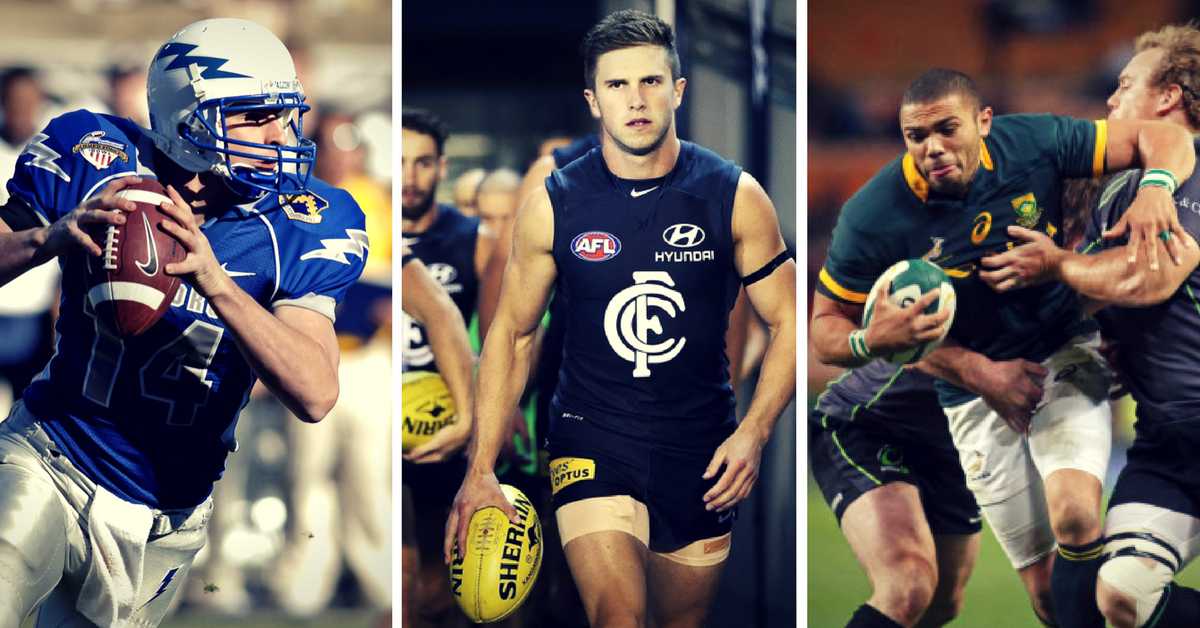 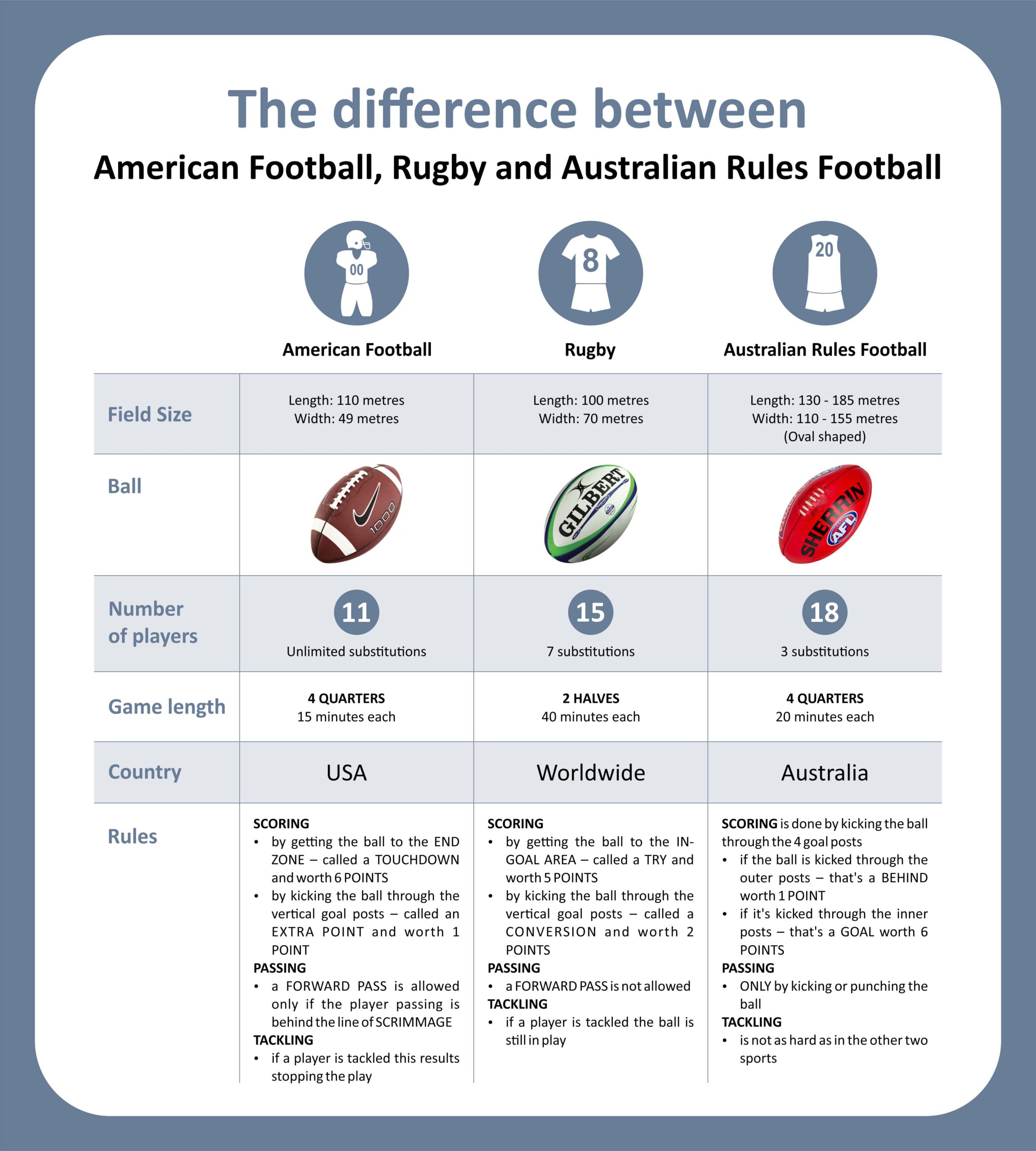 Game objective:
The object of American football is to score more points than the opposing team by carrying the ball behind the opponents touch line, called a touchdown. Teams can also score points by kicking the ball between the posts, this is known as a field goal.

Rugby has a similar objective, but the ball must be carried behind the opposing team’s touchline and then placed down, this is known as a try. Points can also be scored by kicking the ball between the goal posts (known as a drop goal/conversion/penalty kick) depending on the situation.

Passing:
In American football the offense can throw the ball forward or a play from behind the line of scrimmage, whereas this is strictly forbidden in rugby.

Scoring:
A touchdown is the American football equivalent of rugby’s try. In both games there is the opportunity after a try/touchdown to score additional points by kicking the ball between the posts and over the bar. In American football this is award an extra point, in rugby it is known as a conversion and is worth two points.

Rugby does not have an equivalent to American football’s two-point conversion in which the scoring team does not kick at goal but tries for a second touchdown from short range. American football also has a field goal worth three points – where a teammate holds the ball and the ball is kicked from the ground. Rugby’s penalty goal is similar to a field goal in American football, in that the ball is kicked from the ground and may be held by a teammate. American football has one further method of scoring which does not exist in rugby. If a ball carrier is tackled in their own end zone (in-goal area) with the ball or steps out the back of the end zone with the ball, this results in a safety – which scores 2 points for the opposing team.

Ball:
The balls in both games look similar but rugby balls are 27cm long and weigh about 1 pound whereas American footballs weigh a little less and are longer at 28cm. The American football also has more pointy ends and a seam – making it easier to throw.

Number of players:
American football teams have just eleven players whereas Rugby teams have fifteen players on the pitch at any one time.

Substitutes:
In American football, teams are allowed an unlimited number of substitute players whereas rugby teams are only allowed to make up to seven substitutions in a game (depending on specific league/tournament rules) and once a player has left the pitch they cannot return to the field of play, except if there is an injury and there are no other substitutes available.

Field:
The Australian rules field is oval in shape – often a modified cricket field in comparison to the traditional rectangular rugby field’s shape

Number of players:
In Aussie rules there are 18 players to a side on the field at any one time versus rugby’s 15 players. Substitutes can rotate in Australian Rules football without constraint.

Ball:
The football used in Australian Rules football is similar to a rugby ball but generally slightly smaller and more rounded at the ends, but more elongated in overall appearance. A regulation football is 720–730 millimetres (28–29 in) in circumference, and 545–555 mm (21.5–21.9 in) transverse circumference.

Scoring:
In rugby, you can score by three ways, try – the equivalent of a touchdown (either earned naturally or awarded via a penalty), a penalty goal/drop goal, or a conversion.

In Aussie Rules Football the ball can be kicked or hand passed and not thrown and the ball needs to be kicked through the middle of the four goal posts for any points to be scored. Unlike rugby, players cannot throw the ball!

Scoring tends to be more frequent in Aussie Rules due to the flowing nature of the game.

So which game do you prefer? Well, we guess if you’re South African – your favourite, like ours, is rugby – Go Bokke!