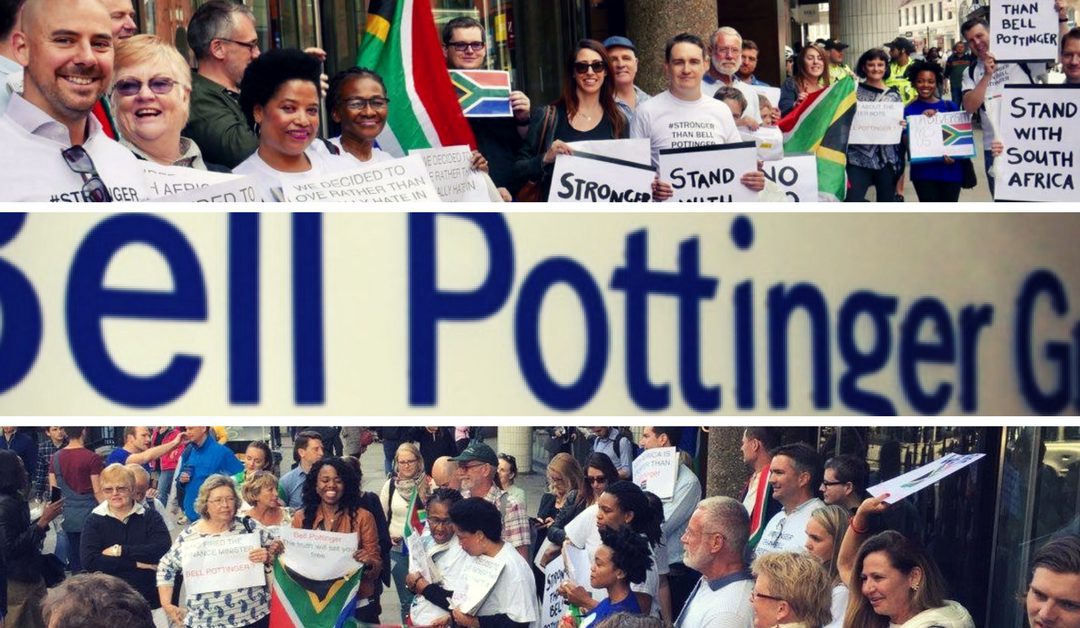 South Africans never forget their home country – no matter where in the world they have moved to, and this was never more evident than with their protest against the UK PR firm Bell Pottinger and its subsequent removal from the UK PR regulatory body – the Public Relations and Communications Association (PRCA)

The UK PR firm Bell Pottinger was hired by the infamous Gupta family to create fake news and hide the family’s growing enrichment at the expense of South African citizens and taxpayers. Bell Pottinger has been accused of using black-ops social media campaigns to distract away from scandals surrounding the Gupta family and President Jacob Zuma. Experts say the campaign created by Bell Pottinger latched onto racial tension in the country and has devastated progress for South Africa.

Bell Pottinger has tried to defend themselves releasing an apology for its actions saying ‘rogue members’ in the firm launched campaigns without the management’s knowledge.

South African expats in London refused to accept this weak apology and demanded action, protesting tirelessly outside Bell Potting’s offices in London – drawing huge international attention to the situation. Their protests were supported by the DA, who laid a complaint with PRCA against Bell Pottinger. The DA’s complaint revolved around the fact that Bell Pottinger exploited racial tensions in South Africa on behalf of the Gupta family and Duduzane Zuma, President Jacob Zuma’s son, with a campaign that included the hashtags #WhiteMonopolyCapital and #EconomicApartheid

Bell Pottinger expelled from the PRCA

The united stance of South Africans both inside and outside the country against Bell Pottinger has had tremendous effect – and on the 4th of September 2017, Bell Pottinger was stripped of its membership of the PRCA, having been found to have brought the entire PR industry into disrepute. Only one other firm in history has ever been expelled before and the director of the PRCA, Francis Ingham, openly expressed his anger at Bell Pottinger saying,

“Bell Pottinger has brought the PR and communications industry into disrepute with its actions, and it has received the harshest possible sanctions. The PRCA has never before passed down such a damning indictment of an agency’s behaviour”

The PRCA also found that the Bell Pottinger campaign on behalf of the Guptas was specifically designed to “inflame racial discord in South Africa and appears to have done exactly that”.

Many South Africans came out to rejoice publicly and on Twitter over the PRCA’s decision. Going forward it means Bell Pottinger can continue to trade but they have lost the honour of being part of Europe’s most influential PR body and their international credibility has suffered substantially.

If you’re thinking of moving abroad to join the ranks of loyal South African expats and need any advice about your financial emigration, contact us today or leave a message below and we’ll help you on the path to financial freedom in your new home.