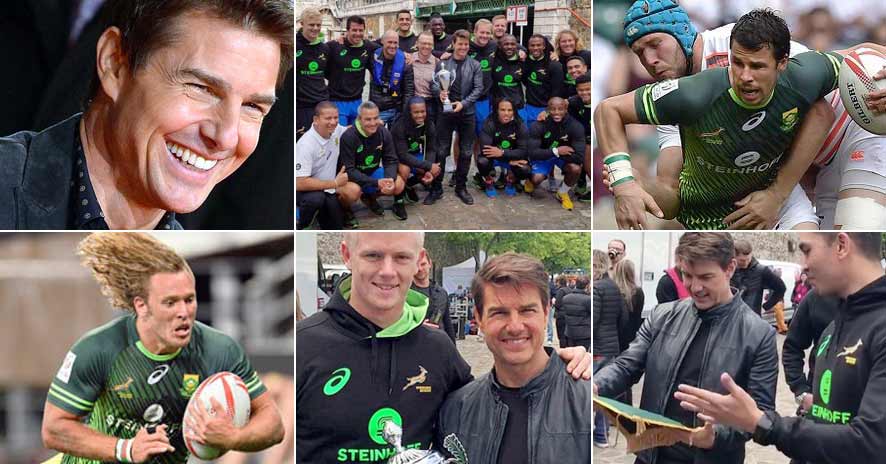 South Africa’s Sevens side wowed the world by winning the Paris Rugby Seven Series recently and their lead is so great, South Africa is set to be crowned World Rugby Sevens Series Champions in London.

To highlight their great achievement, Hollywood Star Tom Cruise, his English co-star Simon Pegg and South African stunt coordinator Wade Eastwood joined the team when they received their trophy in Paris. Mission Impossible 6 is currently being filmed in Paris where Cruise is performing most of his own stunts under the guidance of Eastwood, who he has worked with for many years.

The Springboks have been chasing the dream of winning the World Series since 2012, but have fallen just short every year being awarded runner-up status. This year they have triumphed and broken the “Mission Impossible” barrier.

Blitzboks are on a winning streak

The Blitzboks are the most successful South African rugby team of the past decade and have been victorious in Dubai, Wellington, Sydney and Las Vegas. On the 14th of May 2017 In Paris, they added the Paris Sevens title to their victories with a 15-5 win over Scotland in the final.

In total, the Blitzboks have played 45 games in this year’s Sevens Series and have only lost eight, which gives them an 83 percent win record! They are the second South African side to win the series title.

To achieve their place in the final, the Blitzboks triumphed over New Zealand with an impressive 26-5 win and now lead the World Series by 34 points. If they end on a high, they could be the team to achieve one of the biggest winning margins in history.

The player of the match final was Werner Kok who said, “I think the guys came out and played phenomenally. Every single guy played their part”.

Tom Cruise’s presence when the Blitzboks received their Paris trophy goes to prove the team are not only national heroes but also true ambassadors for South Africa and are a testimony to the great things this country and its people can achieve.

If you thinking of moving abroad and need any advice about your financial migration, contact us today and we’ll help you on the path to financial freedom in your new home.