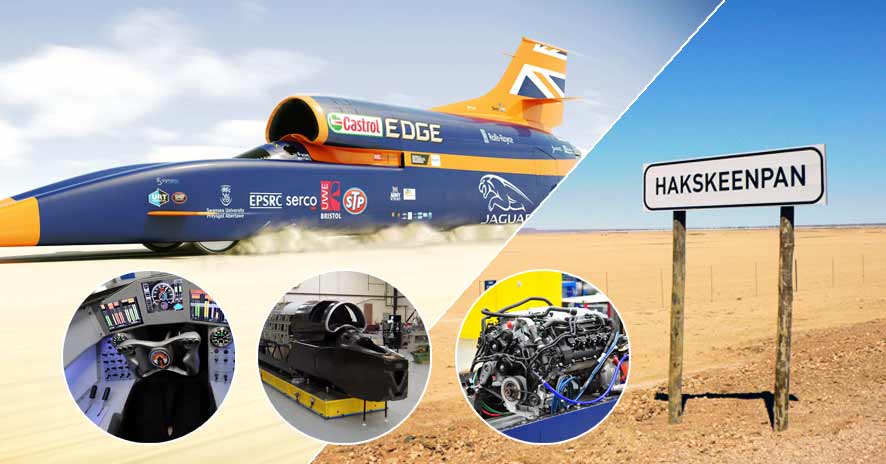 South Africa’s Hakskeen Pan has been chosen as the site for the world famous Bloodhound project – the setting of a new land speed record. Not only will this project go down in history, but it also hopes to create local interest in science and technology and boost the economy of the sparsely populated Northern Cape province in South Africa.

The Northern Cape’s road to the record books

About the Bloodhound project

The car is approximately 13.4 metres long and weighs 7.5 tonnes and is constructed from carbon fibre monocoque with a metallic frame and panels. The SCC is powered with both jet and rocket engines which can produce six times the power of all the Formula 1 racing cars on a starting grid combined, at 135 000 horsepower+.

It is said to be the most complex car ever constructed – with more than 3 500 parts and 22 500 rivets from 160 car part manufacturers.

The team is headed by Project Director, Richard Noble, and driver, Andy Green. Andy is a Fighter Pilot with the Royal Air Force – he’s flown in wars in Bosnia, Iraq, Falklands, Afghanistan and Libya as well as other operations around the world. When he’s not flying, he pursues his “holiday job” on the Land Speed Record Team, and he’s sat behind the steer of numerous SCC cars throughout the years. He is also an acrobatic pilot, Harley driver, skydiver and other adrenalin-boosting pastimes.

Though the record was scheduled for 2015, the project has seen several delays due to the growth of the organisation as well as testing, environmental and engineering challenges. Essentially, the team decided to move the date out to ensure they’ll be ready for the challenge. The date is now scheduled for October 2017. Two years’ delay is not a long time, given that the team took 55 years to research and design the car.

Interestingly, the reason behind the Bloodhound team choosing South Africa for their record is due to the relentless partying nature of humanity! Indeed, their original location for the record was set in the Black Rock Desert, a site which has been used for land speed records several times. But this area is also the site of the famous Burning Man festival. Due to the overuse of the playa surface by festivalgoers as well as a lack of rain, the surface of the Black Rock Desert is no longer suitable for the Bloodhound project.

The team, with the help of Dr Adrian Luckman of the School of Environment and Society at Swansea University scoured the earth for the next best locations, identifying 14 suitable sites – 8 in the USA, 1 in Turkey, 1 in South Africa and 4 in Australia. And if you’re reading this, then it’s obvious which country won the prize!

Hakskeen Pan was chosen as it is the biggest and firmest dried-out lake bed in the world in addition to having a smooth surface – with only 61mm variation over two kilometres. But the area wasn’t initially perfect – in fact, the Northern Cape’s Mier Community removed 16 000 tonnes of rock from 22-million square metres of dry lake bed to prepare the area. This is the largest area of land ever cleared by hand for a motorsport activity. The community’s effort did not go unnoticed, though, and each member of the community received a certificate of recognition from the land-speed records commission and the FIA.

In preparation for the record, the team will scope out the surface of the Hakskeen Pan over the coming months via their remote weather station on the pan which gathers data on temperature, humidity, wind speed and rainfall. They are hoping that another year’s levelling and flooding will produce an optimal environment for setting the new record.

Not just a record but a social initiative

The Bloodhound Project is about more than just setting a record though. Their aim is to stimulate interest in science, technology and mathematics in South Africa and the UK. There are around 5 400 schools, colleges and universities currently following their project and all the data, scientific findings and engineering specifications are free of copyright or intellectual rights – giving interested students the chance to observe, analyse and hypothesise using the data available. In South Africa alone, 300 schools are receiving the project’s information feed.

Green’s helmet which he will wear during the record attempt was selected as part of a schools competition in the UK and South Africa. The winners are, Dirk Coetzee from Adamantia High School in Kimberley, South Africa, and Sam James from Winterbourne Earls School in the UK.

Additionally, the Bloodhound Project named the non-profit South African organisation, Maths & Science Leadership Academy (MSLA) the first Bloodhound SCC Education Centre in South Africa. The academy was started by Kimberley teacher Anne Maclean, who has been teaching maths to disadvantaged pupils since 1974. As part of their sponsorship, the MSLA was given a Promethean interactive whiteboard which has dramatically improved the quality of lessons given to the 250 underprivileged learners currently in the academy.

The Bloodhound South Africa education director and project coordinator, Dave Rowley and Wendy Maxwell, also provide additional learner enrichment sessions on Fridays and run a robotics club. Rowley also hosts a science, technology, engineering and maths leadership group. Other contributors to the project include Cristopher Maxwell, a BSc mathematics and physics major who volunteered for the project during his final year of study and is currently assisting a Cape Town school in building a model rocket car for the world land-speed record of a model rocket car.

The project is said to bring thousands of visitors to the Northern Cape area and will dramatically increase tourism and media exposure of the region which they hope will boost the economy. Local artists and entrepreneurs have already started crafting memorabilia for visitors while others are planning on wooing international and local tourists with delectable home-made dishes, music and other forms of entertainment.

They are expecting thousands of visitors to the area in 2017, and millions of viewers from around the globe checking in online to watch the action in real time.