Nostalgic tunes from South Africa’s past

Nostalgic tunes from South Africa’s past 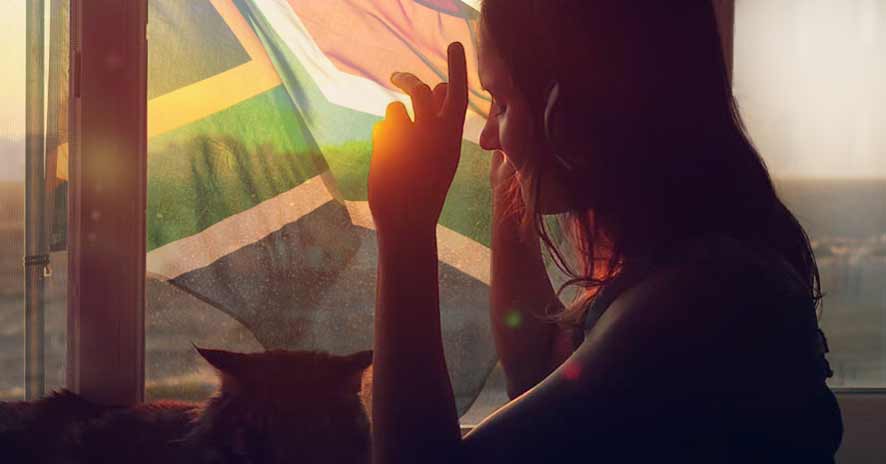 It seems the longer you’re away from your home, the more you gravitate towards tastes and sounds which remind you of the place which still holds your heart. On cold, winter’s days, you find yourself longing for the warm Highveld weather – the sun drumming along to the hum of the cicada and the bray of the zebras in the distance. On those sweltering days abroad, you think back to the icy nip of the karoo morning as you wake up early to brew a pot of moer coffee.

You close your eyes and imagine the Suid-Ooster playing with your hair as you reach the summit of Lion’s head. You smell braaivleis fires, hear lawnmowers at work through the neighbourhood, hear the neighbour yelling at the referee. Further along the street, you hear the noises of the church bazaar – you know there’ll be bobotie served in takeaway containers, boerewors rolls, slap chips, pap and wors. Children are laughing, riding bikes, playing tombola and albasters. Next to the church there’s athletics at the school – you can hear the team yelling their war cries across the pavilion.

One of your neighbours is baking rusks, you know she’ll stop by with some mosbolletjies later – once a month she brings you koeksisters. Her house smells like baking – the way your gran’s house on the farm used to smell. The aniseed and vanilla seems to have settled deep into the linoleum kitchen tiles – even the knitted doilies in the bathroom hint of baking.

And there, if you listen closely, you hear the neighbour tuning the radio in his garage. He’s trying to find the right song to drown out the ruckus of his tools as he works on his car. Yes, there it is – the song you’ve longed to hear for so long.

Songs of South Africa – a trip down memory lane

Solomon Linda – Mbube
Though the rest of the world knows it as ‘The Lion Sleeps Tonight’, this original South African tune by Solomon Linda brings fond memories back to us. Our children may only know this song from movies like Lion King – but we still remember the original.

Jeremy Taylor – Ag Pleez Deddy
Taylor may not have been a South African by birth, but there’s no denying his song Ag Pleez Deddy is written for South Africans. The song, of course, has been covered to exhaustion, and even overhauled by South African Leon Schuster – but Taylor’s version still pulls at our heart strings.

Annelie van Rooyen – Ek Lewe
Ah, what could make a man feel as alive as listening to Annelie van Rooyen’s Ek Lewe. It simply fills our hearts with joy and adds vigour to our footsteps to hear the words of one of our favourite South African artists.

Four Jacks and a Jill – Master Jack
A song which made international playlists is undoubtedly the song Master Jack. In fact, they were the only South African band to have made the American airwaves at the time with this song. It’s a strange, strange world we live in, indeed.

The Staccatos – Cry to me
Whenever you feel like crying, it’s good to know the Staccatos have beaten us to it. This song has since been used in several adverts and movies across the globe – something to be proud of as a South African. Yes, yes, it may not be an original South African tune, but the Staccatos put the South African stamp on it.

Miriam Makeba – Qongqothwane (click song)
The song which was used for ages in that Bic advert, Qongqothwane has captured the hearts of South Africans everywhere – yes, even us who struggle to click along. It’s truly amazing to share the language of our fellow Safafricans with our neighbours abroad.

Jannie du Toit – Liedjie vir jou
Feeling a little bit lonely tonight? Well then don’t under any circumstances listen to Jannie du Toit’s Liedjie vir Jou. You’re gonna do it now, aren’t you? Oh well, then we’ll just listen along. There are, indeed, few songs that can capture nostalgia quite as accurately as this one.

Leon Schuster – Hie Kommie Bokke
Yes, yes, this one doesn’t necessarily scream ‘classic’ – but it definitely screams patriot! It’s highly unlikely you won’t remember exactly where you were when South Africa beat the world to come out on top in the 1995 World Cup – and this song definitely cemented our gees.

Laurika Rauch – Ek het ‘n Huisie by die See
This song manages to tug at our heartstrings twice. What makes it doubly powerful is the fact that it was originally a poem, written by South African poet H.A. Fagan – which then got transformed into the incredibly emotive Afrikaans hit by Laurika Rauch.

Lucas Maree – Ek sou kon doen met ‘n miljoen
You could use a million right now, couldn’t you? Well, a million may not be worth as much as it did when Lucas Maree wrote this song, but the song is still worth a million bucks in our hearts.

Ballyhoo – Man on the Moon
The Americans and Russians may have sent men to space, but South Africans put the man on the musical moon with this international hit.

Juluka – Scatterlings of Africa
Living halfway across the world does kind of make you feel like scatterling of Africa, doesn’t it? Well, don’t fear, South African ethnic rock is near! This song, produced by South African band Juluka (Johnny Clegg & Savuka) is still a favourite for safas around the globe.

Margaret Singana – We are Growing
Okay, so this song may not immediately jump off the page at you, but if you’ve watched the movie Shaka Zulu, then you will know this song by heart. It’s We are Growing of course. Singana had other hits as well, like Mama Tembu’s Wedding which we also love.

Mango Groove – Dance Sum More
Clair Johnston captured the imaginations of South Africans by showing them a path to reconciliation where the bridges between people can be crossed with music. And she made us want to dance, dance sum more.

Johannes Kerkorrel – Halala Afrika
Such a tragedy that Ralph John Rabie chose to steal himself from our lives so prematurely, but still we are thankful and eternally grateful for the amazing legacy he’s left behind. Halala Afrika!

Koos du Plessis
Is there any song or songwriter in the world who can draw us so deep into his magical and melancholy world as Koos du Plessis? We think not. But as we listen to this song, we are truly transported to the world of an inner city child. A child of the streets.

Little Sister – Dear Abbey
In a time when few people dared brace social subjects like teenage pregnancy, Little Sister decided to tackle the issue with their hit song Dear Abbey – a remarkable feat for a band which made it big in 1990.

Mynie Grove – Sweef soos ‘n arend
A song which has been covered by everyone who’s anyone in South Africa – including Karen Zoid, Innes & Franna, Juanita du Plessis and more – Mynie manages to capture the hearts of all South Africans with this breathtaking song.

Have some more South African tunes to add to this list? Sure you do. Why not dust off that old cassette or vinyl player and go retro when you have your next South African get-together?