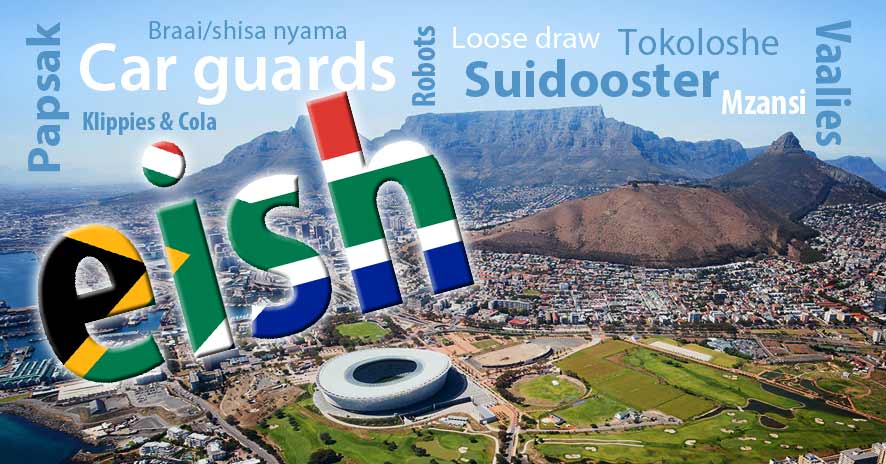 So you’ve been to South Africa have you? Of course you have – you grew up here. It’s your valley. You know everything there is to know about the place – the best holiday spots, anthem, names of all the provinces, cities and towns. You even know which places have the best and worst weather at different times of year.

But what about those friends and colleagues who have never been to South Africa? What advice would you give them before they embark on their journey?

Well, we’ve collectively racked our minds and thought of a few helpful phrases they need to know before visiting the rainbow nation.

A few things to remember when visiting South Africa

Visiting South Africa madam? Well, what’s the weather like in Mzansi? Mzanz-what? M-zan-si! Indeed, only true safas will know this lekker word for their home country. Etymologically, of course, this is an isiXhosa colloquial term (uMzantsi), which means South, or South Africa, as it’s evolved.

Remember to check if the robot is red, green or yellow (orange), as this will make a difference to whether or not you’re allowed to cross the street. We’re talking about traffic lights of course,

You’ll be totally lost if you try to visit South Africa without knowing about a braai or shisa nyama. What on earth will you do every weekend? Indeed, South Africa’s answer to a barbecue is just so much more homely, entertaining and downright South African.

Better hold on to that toupee Bob, the Suidooster is at it again. South Africans have given a name to the wind fiddling with their hair, plans and pretty much anything done outdoors. This famous Capetonian wind is notorious for its feistiness.

Still a smoker? Well, you’re part of a dying breed. Nevertheless, we are not here to judge – so if you’re looking for a single cigarette, be sure to ask the cashier at the tuck shop for a loose draw.

Want to visit Johannesburg? There’s no such place son. Instead – you know what? Instead you should ask your taxi driver to take you to Jo’burg. Yebo sir! Jo’burg is the place to see and be seen. Although not technically the capital of South Africa, it’s the centre of South Africa’s business world – the City of Gold!

Wanna know which spots are most touristy? Well then simply follow the Sho’t left signs or visit their website for a lekker road trippie across South Africa. Sho’t left stems from the South African phrase used by taxi commuters to indicate a short distance or destination in close proximity.

Whether you are driving your own car or simply parking the rental for a wee pop in at your local Spar – the guy trying to show you how to park is called a car guard. Though they infuriate most half the country, we have to admit that they often keep the odd tsotsi away (tsotsis are, of course, ‘gangsters’ or bad guys). Remember to give your car guard a tip for his service.

If you happen to find yourself staying in a house and find your bed on bricks, don’t worry, it’s merely to keep the tokoloshe away. The tokoloshe is basically South Africa’s answer to the Yeti or Bigfoot except much, much smaller, think third of a hobbit small. It’s considered a mischievous an evil spirit that can make itself invisible through drinking water (kinda like a gremlin, except not).

Yes, yes, you’ve had a curry – but have you had a Durban curry? How about a durban curry bunny chow? Well, surely you haven’t had one of those. This reinvented Indian curry dish is famous for being rather spicy, but utterly delicious.

If you like your wine cheap and your wine containers resilient – then, of course, you’ll opt for a papsak (loose sack) of wine. Though the more ‘fancy’ ones are usually packaged in boxes, you can go real cheap and simply grab a no name papsak at most liquor stores.

If you’re visiting the rainbow nation, you’d best be aware of the minor rift between inland and coastal regions. You see, once upon a time one of our inland terrains used to be called Transvaal, and since Transvalers (or ‘Vaalies’) aren’t close to the coast it’s just understandable that they visit the seaside towns en masse each holiday – much to the dismay of locals in these towns.

No matter your level of regret,disgust or empathy – it’s always good to throw some extra ‘eishes’ into your conversation. Just like its homophone, ‘ys’, it will break the ice, so to speak, and show those around you that you understand the gravity of the situation.

People who use tik are ‘getik’ (crazy), no doubt about that – so if you’re offered anything of the kind, it’s always a good idea to say no as tik is an illegal narcotic. Also, if you’re in any area where someone’s offering you tik, you’re probably lost – good idea to get out of there as soon as possible – phone a friend or the police.

It’s probably not a South African phenomena, but we claim naming rights. This saying, translated directly to  ‘fox marries wolve’s wife’, describes the phenomena where it rains sparsely while the sun is shining.

If you feel like a very unhealthy meal, best make your way to Spur and buy yourself a plate of chips (fries) then drench that baby in Spur sauce. We’re not exactly sure what goes into this sauce, but it’s absolutely delectable.

Another taste-sensational meal you can try out is the famous ‘sandwich’ – which really is not a sandwich at all. It’s more of a footlong with french fries, meat, sauce, lettuce and tomato. Sounds a bit absurd, right? Sure, until you’ve given it a try.

Klippies & Cola is a must-have if you’re in for a wee bit of boozing up. It’s basically a mix of brandy and coca cola and is a favourite among students and 30-somethings. A word of caution though, as they ‘brandewyn het nie brieke nie’ (brandy has no brakes).

There you have it. Just a few things to remember when you’re making your way to and through our wonderful country. Welcome! Wamkelekile! Kena ka kgotso! Welkom.

Be sure to make yourself familiar with some of the local South African slang and sayings too.