Home » 15 South African books to add to your library

15 South African books to add to your library

Home » 15 South African books to add to your library

15 South African books to add to your library 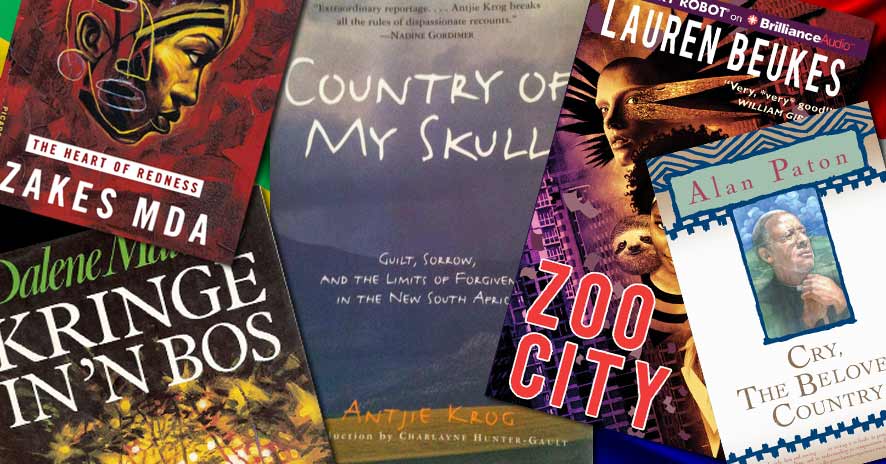 South Africa has made its mark on the world in many ways – we have world class sports teams, we’re responsible for some world class discoveries and inventions and we can boast with some of the most breathtaking natural views and locations on earth.

But we also have another trick up our sleeves – a remarkable penchant for writing. As South Africans we able to capture the imagination and woo our readers into magical paperback worlds. Don’t know what we’re on about? Well, South African writing of course, and those authors who have inspired us throughout the years. So without further ado, we give you 15 must-read South African books to add to your shelves.

Country of my Skull – Antjie Krog

Country of my Skull recounts the complexities of the Truth and Reconciliation Commission’s work in the period following South Africa’s democracy. But what makes it such an incredible tale is not merely the account of a particular period of South Africa’s history, but the personal journey and struggle faced by journalist Antjie Krog as she faces the testimonies and realities of life in South Africa. It’s a deeply personal, poetic and invigorating tale which seeks to heal as much as it haunts, and changes the reader as much as it did the narrator. It is a deeply personal and enlightening journey which will not leave you unchanged.

Winning the Nobel Prize for Literature is no small feat, and once you get a hold of Disgrace, you understand why. After a disgraceful exit from the university following a relationship with a student, professor David Lurie tries to rebuild his life in the countryside whilst trying to reconnect with his adult daughter.

What one immediately struck with is the raw discomfort as Coetzee takes you on the journey to and through disgrace – making you face the realities and atrocities of falling into disgrace. Not only does it take you on the personal journey of the narrator’s disrepair, but it makes us face the disgraces of violence – of forgiveness, acceptance and the differences in the way we cope with seemingly unforgivable events.

The thing most people know about South Africa, and all South Africans have experienced, is the great divide between colour, class and culture. The great divide many people struggle to overcome, or simply wish the world would stop mentioning. And so, too, the divide between different races seems almost unconquerable as one father, visiting his sickly sister and searching for his missing son, stumbles onto the truth of his son’s involvement in a murder. Two fathers are made to confront each other as well as the love and loss of their sons in vastly divergent ways. The novel forces the reader to confront his/her own beliefs, coping mechanisms and the hurt we carry around with us as South Africans. It asks us to consider why others commit crimes, why those we love fall short of our expectations and what it takes to forgive others as well as ourselves when tragedy strikes.

The Heart of Redness – Zakes Mda

Mda’s magical way with words is showcased in his novel Heart of Redness which explores the disillusion of a South African returning to his home country after exile, and subsequently has to face a world he no longer understand. His personal struggle is echoed by the fates and faults of the two groups – the Believers and Unbelievers – who butt heads over widely opposing thoughts on action and progress. In essence, Mda satirises the issues of South African people in such a way that it’s impossible not to grasp the essence of his tale.

Not a novel at all, but a play which was originally banned in South Africa, Master Harold and the Boys, explores racial hierarchies, as well as the measures necessary to overcome them. Additionally, it studies the ways in which the personal abuses we suffer can turn us into the people we hate most – by perpetuating hate and aggression. The whole play uses ballroom dancing as a metaphor for our skill at dealing with life and the people in our lives as our partners. The play has won five international awards between 1982 and 1997. The original broadway production starred the likes of Danny Glover, while the two film adaptations starred faces like Ving Rhames and Matthew Broderick.

Kringe in ‘n Bos (Circles in a Forest), is an undoubted literary gem in South Africa. It helps us confront our relationship with nature and society. Saul Barnard’s fight to save the Forest and face his animal counterpart in the form of Oupoot, a legendary elephant bull. As man and beast circle around each other, Saul is also spiralling towards the truth to face the consequences of exploitation and grasp the tenuous threads that bind us together as a society.

The Lord of the Rings – J.R.R. Tolkien

So Lord of the Rings may not technically be a South African novel, but its writer, J.R.R. Tolkien, hails from the little dorpie called ‘Hogsback’ in the Eastern Cape. Though many of us have seen the movies over the years (including the Hobbit), most have not read these epic books.

What makes these mystical tales so powerful is the subtle nuances which point towards real-life wars, battles, political upheaval and losses. Tolkien unwittingly allows the reader to yearn for unity and associate with each individual fighting to rid the world of evil. It also highlights man’s lust for power, the lengths to which we will go for greed, and redemption which is available to us all if we’ve stumble.

Although most of the titles on our list are pure fiction, I have life recounts the events leading up to and following the chilling night in 1994 when Alison was abducted, viciously assaulted and left for dead by two men in Port Elizabeth. With a slit throat, 37 stab wounds and being disemboweled, Alison’s refusal to die saw her crawling towards the light. Alison survived to face her attackers once more in court and to fight for women, survivors of violence and those who want to give up throughout her life. She was awarded the Rotarian Paul Harris Award for Courage Beyond the Norm in 1995 and received Femina Magazine’s Woman of Courage award in the same year. These days she is a motivational speaker and activist. In her own words; “No matter the circumstances, you always control your attitude, your beliefs and the choices you make…”

Award-winning South Africa writer, Lauren Beukes, has a penchant for tackling issues of moral and social controversy in the environment of a South African dystopia. Zoo City tells the story of a world where individuals are animalled by their crimes – being ‘burdened’ by a particular animal to pay for their crimes. But the upside of this burden is a unique gift bestowed upon each bearer which give them magical powers. But all gifts don’t last forever, as individuals whose animals die find out. Beukes’s writing is thought-provoking, unique and absolutely mesmerising.

A dry white season uses the metaphor of Ben’s youth, where his father and family lost their farm and all their possessions and plays it off against Ben’s adult life, where he is once again forced to watch every one and thing he loves disappear. The disappearance of people’s from Ben’s life follows the death of Gordon, a black Janitor with whom he had a friendship, and Ben’s subsequent fight for the rights of the people of South Africa. The novel discusses the changes that occur within us and within our social groups as we awaken to the truth of our culpability and responsibilities towards each other.

Good Morning, Mr. Mandela tells the extraordinary tale of a young woman whose life and everything she once believed is transformed by one of the greatest leaders who has ever lived. Zelda le Grange, in this autobiography recounts her life as a white Afrikaner who supported segregation and how she became the assistant to President Mandela after the end of apartheid. It’s a tale of transformation and of the freeing power of connecting with people on an individual level – how these individual connections helps us see past our differences and leads us towards a path of inspiration and renewal

Written in the style of diary entries, Spud, recounts the daily activities and emotions of protagonist John ‘Spud’ Milton as he deals with the daily trials of coming-of-age amidst the backdrop of apartheid South Africa in an English boarding school. Van der Ruit’s writing captures the trials and tribulation of an awkward teenager in a humourous and uncomplicated fashion – exploring the truths and contradictions of life through innocent eyes. The tale is hilarious as it is invigorating, sad as it is empowering – it broaches subjects of growing up, politics, friendship, confusion and what it is to be South African for teenagers, who often feel left in the dark.

When Rain Clouds Gather tells the tale of how an ordinary political refugee from South Africa transforms a rural village in Botswana caught in the grips of poverty, with the help of an English agricultural expert. The unlikely team transforms the community they live by challenging the traditional way of life and showing people a new way of thinking which can be incorporated into their existing paradigms for the betterment of all.

It is rare that a book leaves you with such a longing to change and to take up the plight for the environment – but that is exactly what Braam Malherbe has achieved. This book takes one on a personal journey through Malherbe’s preparation for his run across the Great Wall of China, as he also recounts his personal and professional failures which have forced him to face himself and become a better person. It is deeply empowering, moving and cries out for the reader to see what is being done to the earth, how we need to take care of those less fortunate and educate everyone around us about the fate of our natural world. In the end it enlists the reader without a doubt to become a warrior for peace and a custodian of nature.

Boom, bomer, boomste tells the story of Philla, an eccentric girl who cannot seem to fit in with the norms of society. Philla’s only confidante seems to be her wayward grandfather. The family who are all seemingly as unique as the trees, are brought together through a bonsai – a tree given Philla gives to her grandfather under the guise of a ‘white flag’ from her grandmother and returned under the same pretense to her grandmother after his death. So a tiny tree whose limbs have to be trimmed, becomes the metaphor for Philla’s life and the unexpected olive branches which can mend broken relationships.