Home » Reasons to immigrate to Germany

Reasons to immigrate to Germany

Home » Reasons to immigrate to Germany

Reasons to immigrate to Germany 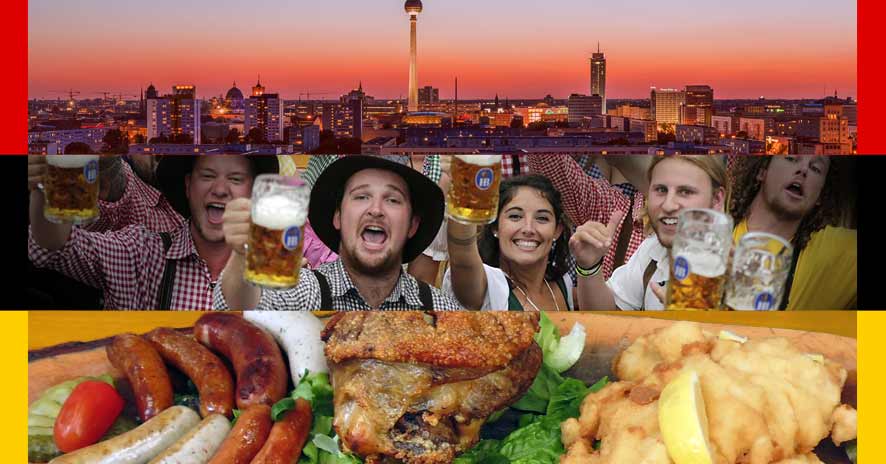 We’re on issue number seven of the cashkows’ #ReasonsToImmigrateTo blog and this week we’re stopping off to visit ze Germans because, well, it’s a favourite immigrant destination for South Africans.

But why is it so popular? We’ll give you the low down on why the country of red, black and yellow is such a stellar immigrant hotspot.

South Africans simply love Germany. Not only is there a chance that you may actually understand some of what they’re saying if you concentrate, but when it comes to Afrikaans culture in particular – there’s a lot of German heritage and correlations. Of course, this is just one of the reasons why South Africans would choose Germany as their new homes, see some of the other reasons below…

The Best Country in the World (no jokes)

One of Germany’s most prominent claims to fame is its focus on innovation. Take Armin Steuernagel, for instance. At 25, he has already started numerous food and e-commerce companies, co-founded nongovernmental organisations and is involved in politics. And the most interesting part about this? Steuernagel is just your average German. Whether you’re looking for creative inspiration or tech innovation, you’ll find that Germany is the best place to live if you have an entrepreneurial spirit.

Germany is the largest economy in all of Europe. In fact, According to Investopedia, Germany is not only the largest economy, but is, in fact, ‘carrying’ the European Union states. The German economy, irrespective of several financial and political crises, has simply always managed to bounce back and reestablish itself as a world market leader much faster than any other countries seem able to manage. Germany has, for instance, loaned fellow EU state, Greece, more than €56 billion to date to help the country recover from its own financial crisis. The country’s economic strength has been attributed to its focus on a balanced ‘portfolio’ so to speak. Essentially, Germany does not simply focus on one sector, but places an equal onus on all sectors. They have a strong export sector, low unemployment, strong housing and manufacturing sectors, a balanced budget, and strong social welfare which encourages more people to work than simply collecting welfare.

Okay, so they have the Autobahn, and that alone makes Germany the country for petrolheads. I mean, who wouldn’t want to drive on a road without speed limits? But the auto-passion doesn’t stop there. Thing is, nowhere is adage ‘practice makes perfect’ more clear than in the automotive industry. The Germans, starting with Karl Benz, have simply had more practice at making cars than the rest of the world. Which is why, of course, why the world is so in love with BMWs, Porsches, Mercedes-Benzes, Volkswagens, Opels and Audis. There’s also the Gumpert Apollo, pt project of Roland Gumpert which turned into supercar extraordinaire. And who can forget the Bugatti Veyron? Although the supercar is manufactured in Molsheim, France, it’s designed and developed by the Volkswagen Group in Germany.

Germany has an interesting past and, much like South Africa, the country still bears the scars of shameful atrocities and racial divide. But the remarkable thing about Germany is the way it’s unashamedly stepped out of the darkness of its sordid past and moved on without obscuring its history. The country did wrong, the people have said they’re sorry, others have forgiven, and ever since they’ve done everything in their might to create a better and equal future for all. They have retained and are proud to share every aspect of their history without feeling ashamed, trying to avoid the topic or holding the past against each other – it simply is what it is. The country also has more cultural activities and destinations than any other country in the world, with 6 200 museums, 820 theatres, 130 professional orchestras and 8 800 libraries (as of 2013).

Not only are almost a 10th of the German population immigrants, but Germany also welcomes refugees. Perhaps it’s reparation for a sordid past or empathy for the fate of the nationless, but Germany welcomes immigrants with open arms. This is in stark contrast to its unwelcoming stance during the Yugoslav war in the 90s. It seems the country has grown in maturity and empathy. According to an opinion poll, 88% of Germans have donated food and clothes to refugees and are planning on continuing this practice. In fact, Germany is the second most popular immigration destination in the world and as of January 2015 Germany has officially been acknowledged as an ‘immigration country’. It offers a wide scope of incentives for skilled migrant workers.

There is probably not a destination in the world where people love their beer as much as South Africa. Wait… there is? Where? Ah! Germany of course!!! In fact, the annual German beer festival, dubbed ‘Oktoberfest’ is so popular, it’s celebrated in South Africa and other countries in the world as well. Oktoberfest is officially one of the most fun festivals, as it forces the whole nation to just grab a pint, sing, dance and joke around with friends, family and thousands for thousands of tourists who attend this annual festival. And, of course, once the festival is done, you can just go to your local beer garden or pub to carry on the festivities.

The most powerful passport in the world

Okay, so you won’t just magically get a German passport when you land in the land of beer and honey. But once you do have German citizenship you’ll be happy to know that the German passport is the most powerful in the world. Not a US passport or UK passport, no sir, a German one. According to Henley & Partners’ Visa Restrictions Index released in February 2016, Germans enjoy the greatest travel freedom with visa-free access to 177 countries, which is the most in the world. So if you have a travel bug, then ‘becoming’ a German is probably the best thing for you!

Germans are often mistakenly called cold, when the actual fact is that they are simply direct. Perhaps an attribute (and attitude) also stemming from its brutal past, Germans don’t see the point in pussyfooting around the subject. There is no grey area, spades are called spades and apples aren’t compared to oranges. Once you get used to the direct manner of conversing and discussing anything, you realise how much time is spared by this transparency and how much future disaster, confusion or misunderstandings are avoided by the mere practice of being open and honest about everything. It may take some getting used to, but it’s certainly useful in the end.

So you’re an engineer?

Another world number 1 ranking is Germany’s first place on the podium for engineering. The country’s success is ascribed to its educational system which is both scientifically strong, but encourages creative thinking – two attributes which are crucial for engineering success. For although good engineers must undoubtedly have their mathematics and scientific knowledge and application waxed, this knowledge would be relatively useful in such a competitive environment without the ability to think ahead, innovate in your stride and be a pioneer in your own right. In fact, companies like Siemens (and many others) offer in-depth learnerships for job-seekers from across the world through three-year trainee programmes which offer them an income while they learn the ‘art of German engineering’.

Spanish trainee, Miguel Vainius, who is busy completing one of the abovementioned courses at Siemens, states that everyone knows what they’re getting when they see ‘made in Germany’. Unlike the ‘made in China’ labels we are so used to, when you know your product comes from Germany, you are assured of quality and impeccable craftsmanship. Business and Political blogger, Hans Pul, echoes Vainius’s sentiments, stating that in a time of globalisation it’s Germany’s claim to top standards and quality which is so great for both consumers and the German economy. Customers don’t need to worry about returning faulty products, as there are none. But should you experience the odd faulty equipment, most companies in Germany will be more than happy to replace and refund you as it’s a matter of honour for them – they simply don’t want to give you a bad experience.

These are just a few reasons why Germany may be the place for you! Do you have any more suggestions, opinions or tips for South Africans moving abroad? Send yours to info@finglobal.com.