South African is lekker – a guide to the best safa slang 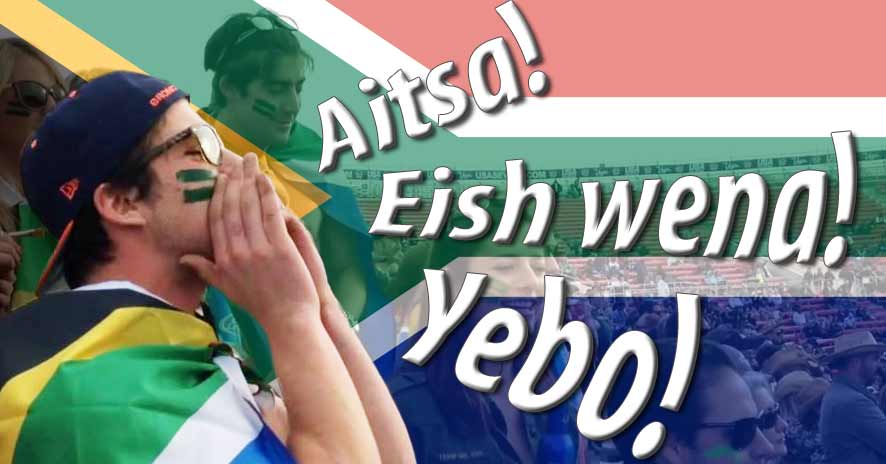 We simply have sayings and colloquialisms you won’t find anywhere else – things we use in everyday conversations which are proudly our own. Indeed, we may have 11 official languages in South Africa, but the fact remains that all of us simply speak one language – South African.

Say it the South African way

Meaning/usage: An expression of resignation or mild upset

Even before Klipdrift made it famous, eish was used by South Africans to show disdain, upset or awe. Eish wena has become so common in everyday use that you can hear this lekker South African saying strewn throughout English, Afrikaans, isiZulu, isiXhosa, Sotho, Ndebele, Sesotho, Sesotho sa Leboa, Setswana, siSwati, Tshivenda and Xitsonga conversations.

What makes this so funny is the wordplay which incorporates a different sense to the one in question. Essentially, a smell is something you must ‘listen’ to and this abstract sense and it is further used in this abstract sense when using it in a non-literal way to say that something is ‘off’ or ‘not right’ (you smell a rat). Something quite literally or figuratively stinks.

Meaning/usage: A strategy or planning session derived from the Sotho word meaning ‘courtyard’.

Whether you’re from the platteland or have worked in the corporate world, you’ll most certainly know about a lekgotla. From government, to the business world, South Africans everywhere have adopted this word (and replaced the Afrikaans ‘bosberaad’) as a formal term for coming together and discussing important matters.

This Khoi San word was incorporated into the Afrikaans language ages ago, and has subsequently been used throughout South Africa as a term of both endearment and approval. It basically means that something is nice and that you encourage the listener to carry on in the positive fashion or that you laud them for their achievements.

Meaning/usage: Used to refer to traffic lights in South Africa

So it’s accepted throughout South Africa that one refers to a traffic light as a robot. But beware when giving foreigners directions using this marker, as they may be looking out for an actual automated machine waiting on the street corner.

Meaning/usage: Used to refer to a liquor store

Another one which may confuse foreigners is the South African way of referring to a liquor store. Though you, of course, get loads of bottled filled with a variety of alcohol in these shops, the name originates more from the handing-in/exchange of empty bottles for cash which is common practice at these shops.

Meaning/usage: A slang saying used to start sentences or mark agreement. Most closely related to ‘how about that’, ‘you know…’ or ‘dude’ in English.

It’s hard to explain intangible interjection terms used in a local language to non-native speakers, but every South African understands where and how to use the term ‘eksê’. This compound term is used in informal conversations, especially among the Cape Coloured communities to kick off a conversation or show agreement with a friend.

Meaning/usage: A colloquial term referring to a local Durban curry dish served inside a hollowed out loaf of bread.

Bunny chow may have travelled across the world, and you will find this dish in various international locations, but this delectable dish has its origins in South Africa – Durban to be more exact. These days you can go to practically any Indian restaurant (as well as many Zulu restaurants) and take your pick of bunny chow from the menu.

Meaning/usage: Used to refer to the informal and proudly South African job description of one who guards your car at shopping centres, malls and in South African streets.

Another uniquely South African one is undoubtedly our car guards. Perhaps there simply is no purpose for someone to guard cars in other countries, but in South Africa these individuals are common and depending on your preference, you may or may not offer your car guard a small payment in coins for doing his/her duty.

The funny thing about asking for a cold drink when visiting a friend or while shopping is that it doesn’t really matter whether or not the drink is cold or not – this is simply our way of referring to sweetened drinks whether hot, cold, carbonated or uncarbonated.

Meaning/usage: Used to refer to the social practice of barbecuing meat or other dishes on a grill or fire.

Ah, who doesn’t know what a braai is? Well, practically anyone outside South Africa. Whether using the Afrikaans term or the isiZulu term (shisa – burn, nyama – meat), all safas know what we’re talking about when we use this term. Because nothing goes together like South Africans, meat and fire.

Meaning/usage: Used to refer to someone who has great knowledge of a particular subject.

Although fundi has been accepted into South African English as well as Afrikaans, this word originates from the Nguni languages (Xhosa, Zulu, Swati, Hlubi, Phuthi and Ndebele) and means master craftsman, expert or genius. It comes from the word ‘umfundisi’ which means teacher or preacher.

Meaning/usage: Used to show agreement or that everything is okay.

Made famous by the MTN campaign, ‘yebo gogo’ (yes grandma), practically all South Africans use this term to show camaraderie and agreement with their peers. Whether you want to let your tjommie know you are okay, or want to tell your mum that you agree with her – yebo works lekker in any conversation.

So go on, spread some safa love and share our beautiful languages with the rest of the world. It’s ayoba!