Home » Reasons to immigrate to Brazil

Reasons to immigrate to Brazil

Home » Reasons to immigrate to Brazil

Reasons to immigrate to Brazil 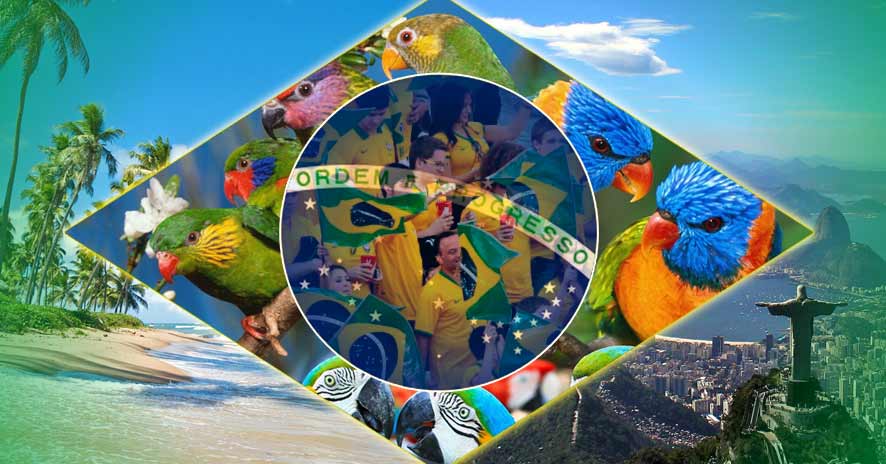 We’re on issue number four of the cashkows’ #ReasonsToImmigrateTo blog. Our journey across the globe takes us from Australia to Brazil this week.

You may be wondering why someone would choose to immigrate to this country. Well, we each have different reasons for considering international relocation – and though push factors are generally very predictable, the same cannot be said for pull factors. Who knows? Perhaps this is just the country for you. So sit back, relax and stretch your legs at pit stop no.4

Choosing to immigrate to the largest country in South America may be a bit of a puzzling move, but Brazil really has much to offer its citizens. With the Rio Olympics just around the corner, you’ll find the spotlight turned on the travel paradise.

The capital of adventure

According the US News, BAV and Wharton 2016 country rankings, Brazil is the no. 1 country if you’re looking for adventure. Indeed, this country has been dubbed the ‘funnest’ place to live (the ranking includes a 10/10 for sexiness). The people are friendly, the climate is pleasant, the scenery is spectacular, and every day is said to be an adventure – no matter where you choose to settle down on this paradise. Let’s not forget the thrilling bus rides and jamming carnivals which make Brazil the ultimate place to be!

Although Brazil has loads of Portuguese and Spanish influences, its culture also has loads of African influences – the music in particular is one thing which smacks of Africa. According to Frei Antonio Vieira, a Jesuit missionary from the seventeenth century stated that Brazil has ‘the body of America and the soul of Africa’. The African heritage has a bit of a sad history – with four million African slaves having been brought over to Brazil over a 300 year period. But the beauty of Africa has remained, with influences which brings visitors to Brazil things like samba, carnivals and African drums.

The kingdom of animals

Bored with the same old African animals? Probably not, but who’d not want a change of scenery and species? As the country with the greatest biodiversity on the planet, Brazil is home to the highest number of species of known mammals (689+) and freshwater fish (3 000) as well as more species of plants (55 000) than any other country in the world. It’s an absolute hub for those who love their photography, wildlife, hiking and exploring. Since the country contains 25% of the world’s rain forests (and 60% of the Amazon), it’s kind of understandable that it would be a hotbed of biodiversity.

Want more bang for your buck? Well then you’ll definitely like the fact that Brazil’s GDP ranking is 9th in the world for 2016 (South Africa is at position 34). Okay, so Brazil has had a bit of a low year, having joined the ‘recession club’ (according to Bloomberg), but as an emerging economy, Brazil is more than capable of managing a comeback – the country has notoriously stable economic growth and low inflation, steady employment and income growth – attributed to their democratic political stability. They are almost a decade ahead of South Africa on the democratic chart, but seem to have made far better advances during this time. Brazil is also one of the fastest growing major economies in the world.

And more beach for your buck

South Africa has an amazing coastline – over 2 500 km to be exact. But Brazil being all extravagant and stuff, says it’s triple or nothing – with 7 491 km of serene coastline just ready to be basked on, surfed from and selfied at. In fact, Baia do Sancho is ranked second in the world for ‘best beaches’ by Tripadvisor and Rio de Janeiro is ranked the sixth best beach city in the World by National Geographic traveller. You have 2 000 beaches to choose from – whether you prefer sandy, busy, secluded, deserted, rocky, pebbly, commercial, family or fishy – it’s all up to you!

Did you know that Brazil is ranked 6th in the world for countries to study abroad? It’s not really something you hear on the news, but this ranking far surpasses South Africa’s ranking of 29th. The ranking is based on five attributes, including: cultural accessibility, fun, quality of university, cultural attractions and prospective interest. The country has over 2 600 higher education institutions. That’s a whole lot to choose from, don’t you think? And the best part is that many of these institutions are free to foreign candidates (all public institutions are free to residents). The Brazilian Exchange Bureau actively promotes the country’s education to foreigners and seeks international students to join their varsities, exchange programmes and research collaborations.

Airplay has a new meaning

If you think Brazil has a lot of universities, then you’ll be even more impressed by the amount of airports. The country has approximately 2 500 airports scattered throughout its terrain. Okay, so some of them may contribute to Brazil’s no.1 adventure ranking. Take Congonhas Airport, for instance. Although the second busiest airport in Brazil, the original runway was not designed to accommodate the high amounts of rainwater, making it an incredibly ‘slippery’ surface to navigate, and one which has caused many a bump and bash between planes (and unsuspecting buildings). The runway has subsequently been overhauled with grooves to make it easier for planes to get traction, but it’s still tough for pilots seeing as the area surrounding the airport is one of the most populated in the country.

According to the website ‘If it were my home’, there’s a lot to look forward to if you move from South Africa to Brazil. Some of these include:

Innovation is the name of the game

Innovation is not necessarily the first thing that comes to mind when you think of Brazil (that, of course, is kaleidoscopic floats and thronging crowds in minimum clothing for the world’s biggest carnival), but the country truly has a spirit of innovation. As a growing economy, they encourage forward thinking and have produced some of the greatest inventions of modern time. These include the automatic vehicle transmission with hydraulic fluid (for those who just can’t deal with the gear or stick shift), the hot air balloon (for those who like neither gear nor automatic transmission), anti venom serum, Kinect for Xbox and the walkman.

According to noteable travel bloggers, Brazil simply is the friendliest place there is. Everyone wants to talk to you. Everyone is your friend and wants to help. Lizzie Davey from Wanderful World states that people even want to hold your bags for you at bus stops or queues. Why? Not because they want to rob you, but because they want to help you. You’ll find a bar in every street with friendly people just burning to befriend you. And don’t think the language barrier will be any type of barrier – in Brazil people will talk to you whether you understand them or not.

There can obviously not be a post about Brazil without some mention of their favourite sport… figure skating! No, goshdarnit, we meant football! In addition to Brazil being a deeply religious country, football is its second biggest worship. Even if you don’t like football, there’s no way you can travel to or live in Brazil without immersing yourself in the spirit of football culture. The Brazilian national football team has won the FIFA World Cup tournament five times – in 1958, 1962, 1970, 1994 and 2002 and several of their players have made it onto the international club stage.

These are just a few reasons why Brazil may be the place for you! Do you have any more suggestions, opinions or tips for South Africans moving abroad? Send yours to info@finglobal.com.