St. Patrick’s day around the world

St. Patrick’s day around the world 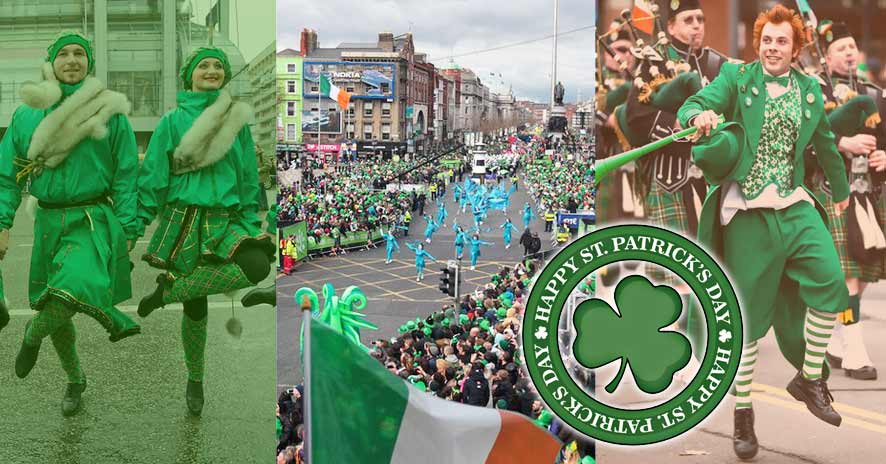 What is St. Patrick’s Day?

The Feast of Saint Patrick is a cultural and religious celebration held each year on the date of death of Saint Patrick, the foremost patron saint of Ireland, on March 17.
Saint Patrick was a fifth century Romano-British Christian missionary and bishop of Ireland. After enslavement by Irish raiders, he found God and, subsequent to his escape, became a missionary – spending his life converting pagans to Christianity. His success at conversion eventually became an allegory for ‘driving snakes out of Ireland’.

What happens on St. Patrick’s Day?

Though the observance is traditionally celebrated within Christian circles – the Catholic, Anglican Communion, Eastern Orthodox and Lutheran churches in particular – it has evolved over the years and become more of a celebration of Irish heritage and culture.

On this day, people across the globe participate in festivals, parades, by attending church services and wearing green attire or shamrocks. Of course, the celebration has also become synonymous with merriment and drinking alcohol – a practice which seems to stem from the customary lifting of Lenten eating and alcohol restrictions on the day.

How is St Patrick’s Day celebrated across the world?

People who know the Irish will tell you that they are not readily contained – the infectious spirit of the Irish has similarly spread across the globe and the annual celebration of Saint Patrick has produced some interesting jollifications internationally.

Each year on St. Patrick’s Day, the Chicago River is dyed a bright green. The dyeing is followed by a St. Patrick’s Day parade across the Columbus Drive Bridge as well as other events throughout the windy city.

In Munich, the St. Patrick’s Day parade usually falls on a weekend. During this day floats and performers take off en masse from Müncher Freiheit to Odeonsplatz and join in the after-parade festivities, including Irish music and dance.

The second biggest St. Patrick’s Day Parade normally the Sydney parade. In addition to floats and general festivities, it is also a family celebration, marked with international music acts, food stalls and more. Unfortunately organisers were a bit short-funded for this year’s celebrations, but that hasn’t stopped citizens from planning their own parades and festivities.

The annual St. Patrick’s Day parade in Toronto usually features a local Irish community Grand Marshall to head up the parade, which travels along Bloor Street, Yonge Street and Queen Street to end at Nathan Phillips Square. It features an array of floats, performance and marching bands.

The St. Patrick’s Day London parade generally falls on a weekend before or coinciding with the date of the observance. The parade usually runs from Green Park towards Trafalgar Square and includes colourful floats, marching bands, traditional Irish dancing and music.

The largest St. Patrick’s Day parade takes place each year in New York. On this annual celebration, the streets go green as people march down Fifth Avenue. The parade is broadcast on live television each year and lasts about six hours before crowds disperse to local Irish pubs and stages to celebrate into the wee hours of the night.

The Schuman area of the EU Quarter of Brussels, also known as the Irish Village, is where you’ll find your Irish entertainment on St. Paddy’s. The city traditionally also fits Brussels’ most famous statue, the Manneken Pis, in a green tweed outfit.

Of course, Manneken Pis is not the only one going green – in Auckland the SKy Tower at SKYCITY Auckland also goes green during the annual celebration. There is also a parade and Fleadh Cheoil (an Irish music competition), dancing, Gaelic football and food stalls. The day also coincides with Auckland’s Irish Society Carnival at Fowlds Park.

The annual St. Patrick’s day Parade in Tokyo typically heads along Omotesando Street near Harajuku Station and features marching bands, colourful floats and thousands of participants dressed up in costumes.

Cape Town is also host to various St. Paddy’s celebrations every year. The city’s venues offer patrons Irish dining and drinking specials, as well as live Irish entertainment, giveaways, games and dancing. In Greenpoint, visitors are told to be on the lookout for various leprechauns and other strange characters dressed up in green.

We wish all our Irish friends and family, as well as others celebrating this day a happy St. Patrick’s Day. Have a pint, dance like no one’s watching and be safe!