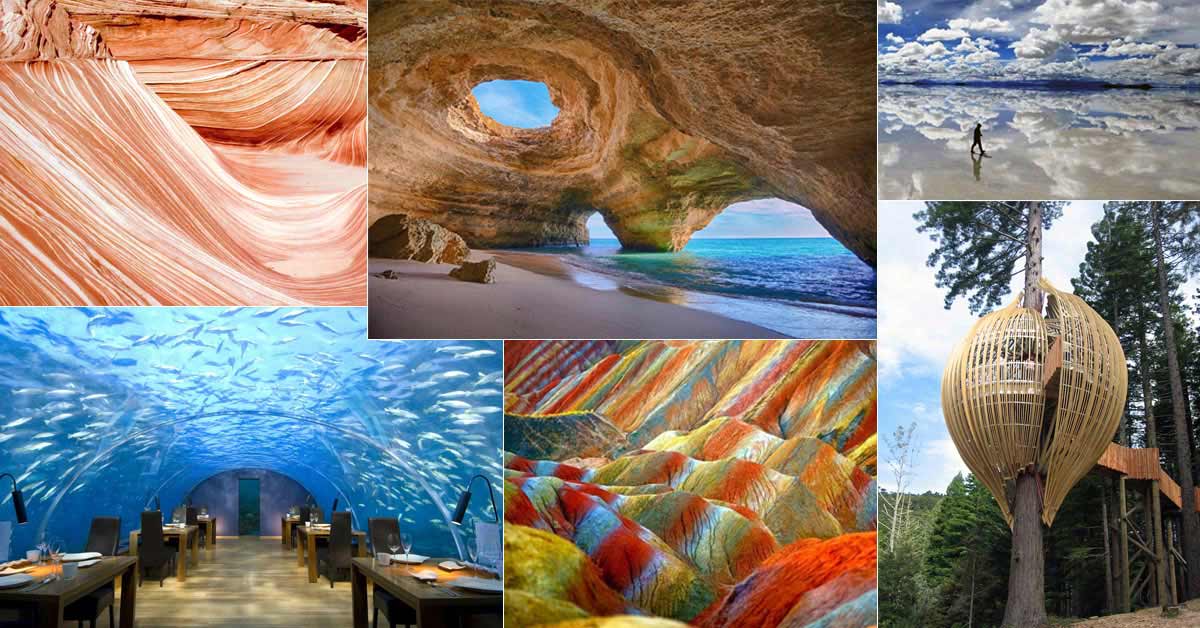 There are, of course, the obvious places to visit – Paris, Rome, London, New York. But perhaps you are leaning towards a more interesting excursion. Perhaps you are hoping to discover some of the more mysterious places in the world.

Well, if this is you, then read on – we have a host of destinations for the adventurous and enigmatic spirit.

Interesting travel destinations around the world

Towards the souteast, southwest and northwest regions of China you will find the characteristic ‘red bed’ cliffs which are a unique petrographic geomorphology found in China. The enormous landforms resembling karst topography are created by uplifted continental crust which has been faulted and eroded to expose the layered red rock.

Whether you have a thing for planes, or a fear of flying, the Jumbo Hotel may be what you are looking for. Located inside a decommissioned Boeing 747-200 jetliner, the hotel has a unique offering which allows visitors to stay inside one of the 27 3-bedroom rooms in the revamped plane.

Approximately 240 kilometres east of the Horn of Africa and 380 kilometres south of the Arabian Peninsula lies the isolated island of Scotra. What makes this island so unique is its plant life – a third of which is found nowhere else on the planet. It has been described as one of the most ‘alien-looking’ places on earth due to the abundance of it’s endemic tree species, Dendrosicyos socotrana – the cucumber tree.

Lonely Planet has stated that landing on Cappadocia feels like ‘landing on another planet… as if plucked from a whimsical fairytale’. It is a geological oddity containing fields of honeycombed hills and towering boulders. In addition to the fascinating natural landscape, residents have long created shelters in the soft stone, contributing to its beauty with scattered homes of troglodyte-style architecture.

Bordered by the Russian republics of Chechnya and Dagestan as well as Georgian provinces Kakheti and Pshav-Khevsureti, Tusheti is comprised of four mountain communities – mostly sheep herders. If you fear heights, then stay away, because the only road to Tusheti follows the 2 900 m high Abano Pass which is only accessible by 4WD and passable from late May to mid-October. It contains picturesque snow-covered rocky peaks, deep gorges and tower-dotted vilates with grassy vales spotted with flocks of sheep.

The world’s largest salt flat, Salar de Uyuni, covers a majestic 10 582 square kilometres in the Daniel Campos Province in Bolivia, at 3 656 metres above sea level. The flats are covered by a thin sheet of water creating a fascinating mirror effect which makes visitors feel like they are walking in the reflected clouds.

Off the coast of Belize near the centre of the Lighthouse Reef lies the small atoll, the Great Blue Hole. It is circular in shape, 300 m across and 124 m deep and provides spectacular views for visitors. It is one of the top ten scuba diving sites in the world due to its crystal-clear waters and rich sea life.

Formed approximately sixty million years ago by a volcanic eruption, the Giant’s Causeway resembles something from science fiction. The World Heritage Site contains an estimated 37 000 polygon columns of geometric perfection which has led to local legend that they were created by a giant.

Human garbage is not always the cause for admiration but Glass Beach is an exception. This beach in MacKerricher State Park contains heaps on heaps of glass ‘beads’. These beads were formed through the establishment of a dumping site for glass and appliances. The metal and other wastage was eventually removed, leaving a coastline of multicoloured eroded glass beads.

If you want to experience human culture in abundance, then Djmaa el-Fna (Of Jmaa el Fna) is the place to visit. Marrakesh’s main square has been likened to an open-air theatre with stalls, snake charmers, henna tattoo artists and edible delicacies strewn throughout the fascinating market. It was named a ‘Masterpiece of World Heritage’ by Unesco in 2001.

The site of inspiration for famed writer, J.R.R. Tolkien, Hogsback has a world of mystery to offer the visitor. The Eco Shrine, nestled in the Amatola Mountains, can be reached via a leafy tunnel of hazelnut trees and contains a 6m tree sculpture of an angel carved out of a redwood tree which was struck by lightning. It also contains a circular enclosure with oil paintings and glittering mosaics.

Naica Mine in Chihuahua is a working mine known for its amazing selenite crystals. This lead, zinc and silver mine hosts the 300 m selenite caverns which contain crystals as large as 1.2 m in diameter and 15 m long. Mining operations were indefinitely suspended in October 2015.

If you’re up for a bit of a creepy experience, then the Victorian mansion, Winchester Mystery House, is for you. This mansion is a labyrinth of 160 rooms, 2 000 doors, 10 000 windows, 47 fireplaces and 47 stairways was specifically designed to confuse unfriendly apparitions. It is said to be haunted and overnight guests attest to hearing organ music as well as seeing moving lights, turning doorknobs and ghostly figures at night.

Waves don’t always belong in the sea – this is clear when you visit The Wave in Arizona. This sandstone rock formation located near the Arizona and Utah border resembles colourful red and brown waves. It is famous among hikers and photographers for its kaleidoscopic, undulating forms, and the rugged, trackless hike required to reach it. Erosion by wind and rain has created the spectacular landscape resembling waves frozen in time.

Undoubtedly one of the most breathtaking places you could ever visit is the Benagil Sea Cave in Algarve. It is part of a system of caves lining Portugal’s southern coast. It is a destination which is said to restore one’s energies. The sea cave has two big entrances, a huge collapsed roof forming a massive arch which hosts a secluded beach of sand inside the circular grotto.

Mount Mulanje is a spectacular natural hulk of twisted granite flanked by surrounding plains. It stands at over 3 000 m high and contains a host of green valleys, rivers and waterfalls. Dubbed the ‘Island in the Sky’, most of the summits can only be reached by the most experienced technical climbers. It is also home to the endemic Mulanje cedar tree which can grow up to 40 m high.

Flower lovers better listen up, because Hitachi Seaside Park is one of the most spectacular floral destinations to be found around the globe. Covering an area of 190 hectares, the park features blooming flowers throughout the year and is known, in particular, for its 4.5 million baby blue-eyes flowers in Spring. It also has near a million daffodils, 170 varieties of tulip and thousands of other plant species.

Not all of us have the time and patience to maintain a giant aquarium in our homes but, of course, if you visit Ithaa Undersea Restaurant, this isn’t necessary. Constructed six meters below sea level off Conrad Maldives Rangali Island in the Maldives, the restaurant has a capacity of 12 people and is encased in a transparent acrylic roof allowing diners to feast under the sea.

Angkor Wat has been called ‘a place of peace and power’, and for good reason. The temple complex in cambodia is the largest religious monument in the world, measuring at 162.2 hectares. The temple is a representation of Mount Meru (the home of the gods) and is a classical example of Khmer architecture.

Tree lovers will love to visit the Yellow Treehouse Restaurant in Auckland. Designed by Pacific Environments Architects, it is a fascinating symbol of architectural prowess resembling an enormous chrysalis which is perched nine metres above ground on a redwood tree.

There are many other fascinating places to discover in our world. We urge you to go out, discover and find those magical places which speak to your soul.