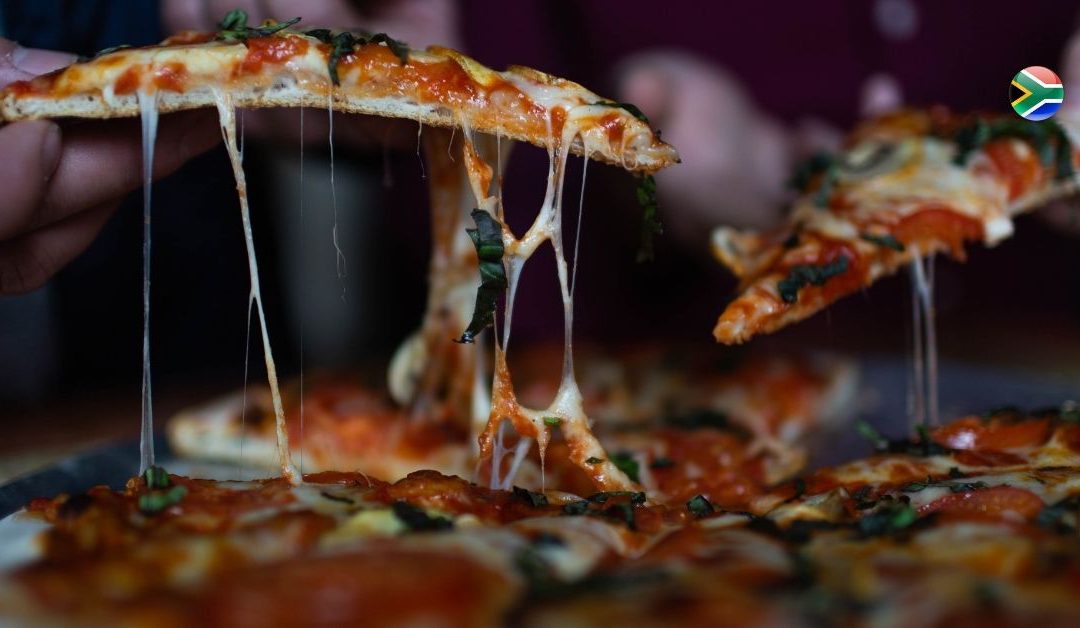 South African food usually conjures up visions of bobotie, biltong and boerewors, and that’s just for starters. However, few people attribute a loaded pizza dripping with cheese as the food you would expect to find in sunny South Africa. They couldn’t be more wrong. Saffas have taken this Italian meal and added a twist of Africa. In fact, there are so many places to enjoy a good pizza in South Africa; one would think Italy had moved continents!

Pizza in a bite-sized slice

During the 18th century, the humble pizza was born in Naples, a town in Italy. Eaten by the poor folk, it was originally a flatbread spread with what meager toppings the working class could afford. These toppings consisted of a few herbs or mushrooms gathered locally. A far cry from the decadent pizza topping ideas we enjoy today! After all, pizza isn’t pizza without gooey cheese, tomatoes, and mushrooms, at the very least!

As food for the poor, the pizza was not initially sold in upmarket restaurants or shops. Instead, street sellers would sell slices to the public, and the size of the slice was based on what the customer could afford. Many people felt that pizza was common, and it was often described amongst the gentry as disgusting! Nowadays, a slice of good pizza can be pretty pricey depending on the topping you choose. Moreover, most foodie places have pizza lurking somewhere on the menu due to its immense popularity amongst the young and old.

Margherita pizza fit for a queen!

1889 saw Queen Margherita of France visit Italy. The story goes that the royal wanted to try local food rather than her typical French cuisine. So, a pizza with various toppings was whipped up by none other than Raffaele Esposito. In true Italian style, each slice was a different type of pizza. As luck would have it, the royal gave a cheeky thumbs up after eating a slice of pizza, showing the colours of the Italian flag. Italy named the pizza in her honour, so the Margherita pizza was born!

New York restaurant, sells the world’s most expensive pizza. Here you can get bling and pizza all in one sitting!

The pizza is made up of eight slices, each costing $250. Its topping consists of French Foie Gras and truffles, English Shilton Cheese and Caviar from the Caspian Sea. Then the entire pizza is showered with flakes of 24-karat gold – procured from Ecuador! Now that’s a rags to riches story!

All this talk of pizza has probably made you just as hungry as we are! So, let’s jump into a loaded pizza, Saffa style! We have chosen biltong pizza with green peppers for this recipe, the perfect pizza for watching the Cricket!

What you will need

For the pizza base

What to do for the base

Serve with an ice-cold beer or a klippies and cola while sitting around the fire with family and friends!

For friendly advice tailored to suit your unique needs, contact the FinGlobal team. South African expats know they have our full support from the moment they consider emigration, right up to the point they settle on foreign shores.

We offer up to date advice regarding tax, retirement annuities, pensions, financial emigration, and more. For accredited advice backed by more than ten years in the industry, contact FinGlobal to discuss all your immigration requirements today.