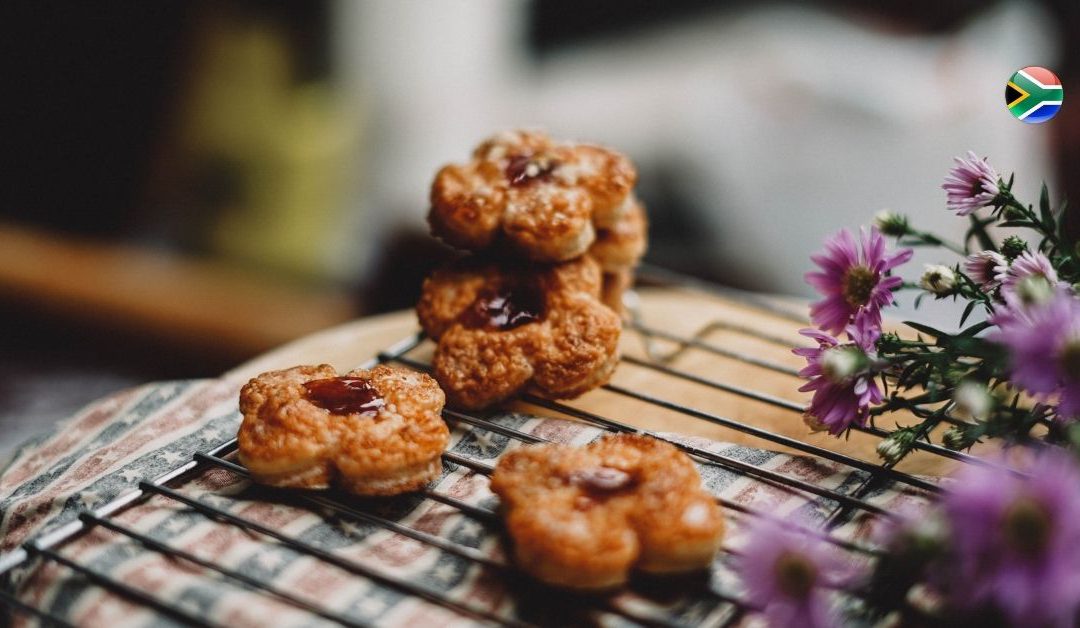 Decadent puffs of chewy coconut meringue, apricot jam, and rich butter pastry make up the delicious hertzoggie, a South African teatime, in fact, any-time favourite! Saffas home and abroad will remember many childhood teatime visits complete with chatting around the kitchen table while feasting on these tasty treats.

As with most South African food, the hertzoggie is deeply entrenched in our heritage. Named for South African prime minister J.B.M Hertzog, these tasty treats were made by loyal woman supporters at the time. Perhaps Mr. Hertzog had a sweet tooth? After all, we all know the way to a man’s heart is through his stomach! Maybe these ladies were onto something with their easy hertzoggie recipe?

Something worth mentioning is that the opposing party at the time had a similar idea, immediately creating a teatime treat of their own as a show of support for their leader: the smutsie. And while all that baking was going on, staunch loyalty was seen as each side refused to eat or bake the opponent’s cookies! Oh, the irony! The truth is, both the hertzoggie and smutsie are so similarly made, they are almost identical! While the Hertzoggie sports a meringue topping made of egg whites and coconut, the smutsie is equally tasty but prefers a softer topping of creamy butter icing. It seems these politicians certainly had a ‘soft spot’ for tasty confectionary!

Food has always held a certain amount of symbolism in South African history; however, this is the same for many cultures. In fact, humans have always used food as a form of celebration or support, often placing great significance on certain foods. So why do we do this? It probably hails from the caveman days when a celebration was held feasting around the campfire each evening. Surviving another day in the wild was undoubtedly cause for celebration with family and friends – ring any bells?

If you’re still a little skeptical of this, check out how we’ve used food to symbolise prosperity, good luck, rebirth, immortality, and even military power throughout history.

Enough about food history and symbolism, let’s get to the good stuff: the hertzoggie recipe!

Fast forward a few dusty decades, and you will see that the hertzoggie recipe has remained mostly untouched, that is until we found this recipe that replaces the usual pastry base with a cupcake! While most saffas agree that messing with a traditional recipe is a recipe for disaster, this hertzoggie recipe is the perfect combination of smore-ish chewy and soft textures filled with a zap of sweetness! Let’s wander down memory lane and whip up a few hertzoggies with a delicious twist.

For the cupcake bases

For the meringue topping

For the meringue topping

Serve with a steaming cup of coffee or tea. For a healthier version of this recipe, you can exchange the sugar for xylitol and replace the apricot jam with a diabetic jam alternative.

FinGlobal provides expert financial advice for South African expats globally. If you are looking for a bespoke emigration plan, FinGlobal is the team you need.

For advice that covers retirement annuities, pensions, tax, and much more, the friendly FinGlobal team can assist. Our ten-year industry experience is a testament to the sound advice we have given and continue to give to South African expats looking to follow their adventures across the ocean. For excellent service and sound, accredited advice, contact FinGlobal today. Give us a call on +27 28 312 2764 or send us an email at info@finglobal.com, and we will assist you promptly.