7 traditions to embrace if you’re immigrating to the USA 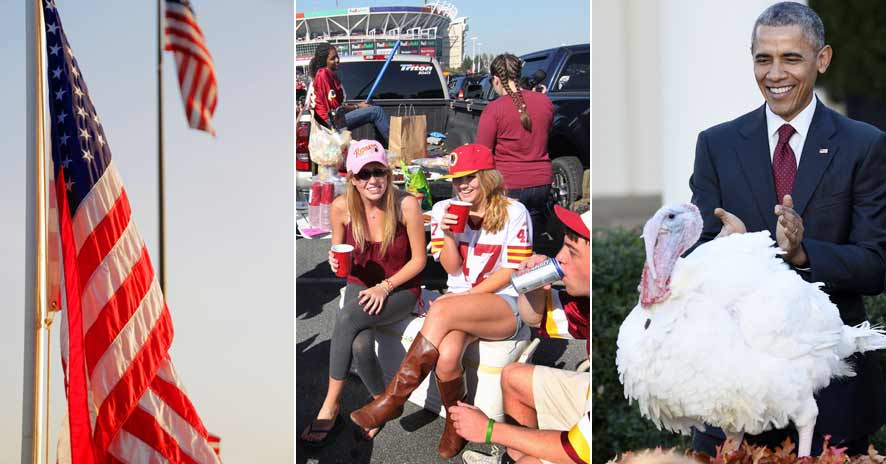 America is a melting pot of cultures and traditions and have created some that are uniquely their own. If you’re heading to the USA as an expat, get ready to embrace, or at least experience, a few of these traditions:

Traditions to embrace when immigrating to the USA

Tailgating is usually the term given to driving too close behind someone on the highway. In the USA, they take things to a new level and throw tailgate parties at sporting events – particularly football. Tailgate parties take place in the sport stadium’s parking lots and start many hours before the actual game. Be prepared to see people cooking food, playing lawn games and even sitting down and watching the game in front of their TVs – hooked up to their own satellite dishes!

The ‘American Dream’ is a term you’ll hear often while you are in America and refers to the opportunities that are open to everyone. Everyone in America should be able to achieve the prosperity or life they desire and it has become a tradition to pass this idea down from one generation to the next.

Every year in autumn, people flock to farms to celebrate ‘fall festivals’ as the harvests are completed. This can include taking hay rides, walking through corn mazes, sampling fruit and petting farm animals. One of the strangest traditions that takes place every year is ‘Punkin Chunkin’ – watching pumpkins being blasted into the air and over great distances!

Counting down in Time Square

Every year on New Year’s Eve thousands of Americans gather in New York’s Times Square to count down the seconds to midnight and ‘watch the Times Square’s ball drop’. This is accompanied by huge celebration, fireworks and general good cheer.

Waiting for, and watching the Super Bowl Commercials

Every year at the Super Bowl, millions of Americans wait in breathless anticipation for the Super Bowl commercials. In the days that follow the airing of these advertisements, they are hotly debated and discussed – often more than the actual game itself! Not surprisingly advertisers pay huge amounts of money to appear at the Super Bowl and a 30-second slot can cost over $3 million.

Watching a ‘Trial of the Century’

Americans love their court room dramas – particularly if they are live. From O.J Simpson to President Bill Clinton, the entire nation sits enraptured watching the proceedings of the court case, and it’s always referred to as ‘The Trial of the Century’.  As things get interesting in American politics, many people expect, we may be seeing a new ‘trial of the century’ happening soon, so watch this space.

Every year at Thanksgiving, the president grants a reprieve to a live turkey presented to the White House by the National Turkey Federation. This lucky bird escapes being thrown into the pot and eaten – and the entire event is captured live on television and watched by the nation.

If you thinking of immigrating to the USA and need any advice about your financial migration, contact us today and we’ll help you on the path to financial freedom in your new home.
[contact-form-7 id=”6581″ title=”_Blog post (call me)”]