7 dangerous animals to avoid in Australia 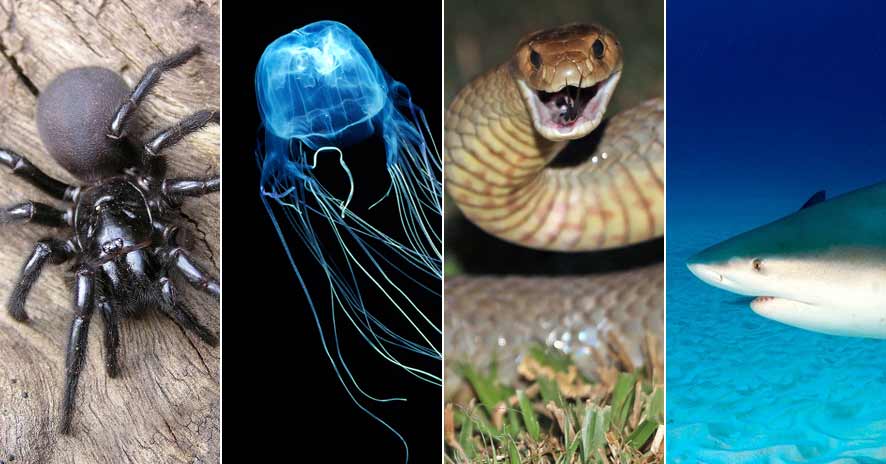 Expats are often attracted to Australia because of the healthy, secure lifestyle offered to families. However, many people don’t realise that Australia is infamous for its dangerous animals and has more deadly snakes than any country in the world and many other equally venomous creatures. To stay safe, be aware of and do your best to avoid the following animals:

Just when things are warming up in northern Australia and you want to head into the water, that’s when it’s the Box Jellyfish’s favourite time to float around. They come close to shore and breed in estuaries and have trailing, stinging tentacles that stretch for more than two meters.  A Box Jellyfish’s sting can be extremely painful and will cause immobilisation and affect your breathing and movement. If you are badly stung you can suffer cardiac arrest within a few minutes.

If you think things might be safer out in the deeper waters, you couldn’t be more wrong. This is the home of the Irukandji Jellyfish, which is the size of a fingernail and not that easy to spot. If you are stung by one of these you’ll experience severe lower back pain, cramps, nausea and possibly even more fatal symptoms.

The bull shark is also a looming danger found in estuaries and close to harbours where they scavenge for food. Responsible for savage bites, they can remove limbs and lead to loss of life if you are not treated immediately

Moving onto land, the brown snake group are extremely dangerous and are found all over Australia. Growing up to more than one metre in length they are easy to spot, and will aggressively strike out and bite you. The bite can often be painless, so if you are moving through thick bush you need to be alert. If you are bitten you will require immediate medical attention. If you are not treated, you will experience paralysis, uncontrollable bleeding and death.

This little spider is found in Sydney’s north-shore suburbs. They favour dark areas as direct sunlight can kill them – so look out for them under log piles, bricks or in any dark place. The bite from the male spider can be fatal. If you are bitten, you will know it, as the bite is extremely painful and causes sweating, tingling and muscle spasms.

Found commonly in Sydney’s bush land, this snake camouflages itself in leaves in bushy areas. If you don’t see it and step on one, its long fangs can penetrate deeply through your trousers. If you are bitten, you will experience loss of motor and sensory functions and if you are not treated this will lead to paralysis and even death.

No list of Australia’s dangerous animals would be complete without the Great White Shark. Found commonly off Western Australia, the most recent fatal attack occurred in April 2017 when 17-year-old Laeticia Brouwer was fatally attacked while surfing. This was the third deadly Great White Shark attack in the state within 12 months.

If you’re thinking of immigrating to Australia and need advice concerning your finances, contact us today. We’re here to help you unlock your South African wealth and put you on the path to financial freedom in your new home.