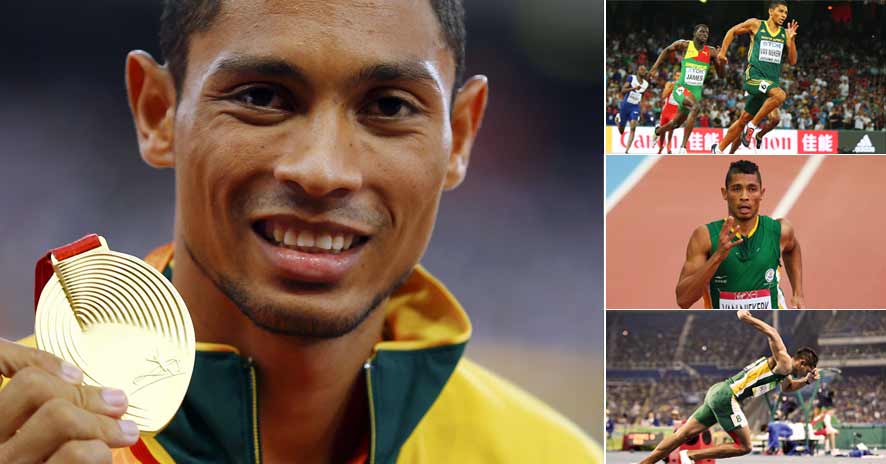 South Africa’s golden boy and world record holder, Wayde van Niekerk, showed the world what we’re made of at the Rio Olympics this year.

But what do we know about this amazing 24-year-old athlete? We’ll give you the low-down on Wayde van Niekerk.

He trained with the world’s other fastest

Before breaking the world record at the Olympics, Wayde van Niekerk trained with other sprinting champ, Usain Bolt, in Jamaica. The two have become great friends, and Bolt was one of the first to congratulate van Niekerk after his amazing 400 sprint.

The world record isn’t his only world first

Since doping is a serious problem in sports, getting doping tests is an unavoidable part of athletics. This is unfortunate for Wayde, who is so afraid of needles, he fainted during the last doping test when they drew his blood.

Before the Olympic games, Wayde van Niekerk had close to 10 000 twitter followers, he’s since racked up a whopping 50 000 more followers, placing his following at 61 000 people. Follow him on twitter using the handle @WaydeDreamer.

Wayde’s cousin also won a medal at the Rio Olympics

Running onto the field for South Africa, Cheslin Kolbe of the saffa sevens team took home a bronze medal – and it just so happens that he’s Wayde van Nieker’s cousin.

He made pocket money as a kid by scoring tries

As a rugby player in school, Wayde’s coach offered the players cash for tries – an incentive which saw Wayde pocket lots of pocket money during his youth.

He could not afford shoes when he started running

When Wayde first started sprinting at Grey College, he couldn’t afford running shoes and had to wear his stepfather’s shoes for two years before he finally got a sponsor. At the time he didn’t even qualify for the Free State team.

Wayde has admitted to vomiting each time after a hard 400 m sprint. After his sprint in Paris he dodged the interviewers as he had to find a place to throw up before speaking to anyone.

Wayde’s great-grandmother, Ans Botha, was also a sprinter and she’s coached since the 60s. Named ‘Tannie Ans’ by her athletes, she hails from Namibia and was the head coach at the University of Free State where Wayde studied.

It just so happens that Wayde’s greatest adversary, Michael Johnson, was commentating during Wayde’s Olympic sprint. Johnson’s record time of 43.18 remained uncontested for 17 years – until Wayde cut 0.15 seconds off the time.