Home » Municipal elections and the Rand – where are we headed?

Municipal elections and the Rand – where are we headed?

Home » Municipal elections and the Rand – where are we headed?

Municipal elections and the Rand – where are we headed? 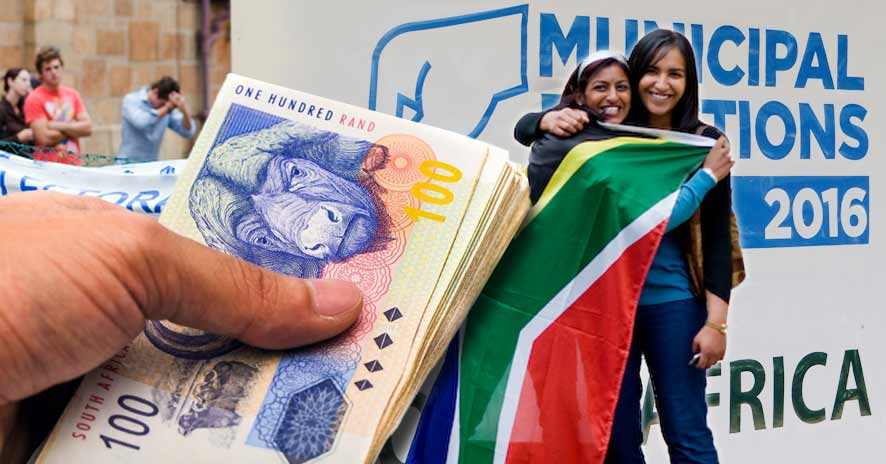 2016 has presented quite a few financial stir-ups globally – all the more so for the South African economy.

Thus far, we’ve had to wrestle with the repercussions of a cabinet shakeup – the vestige of our president’s ministerial shuffling at the end of 2015.  We’ve felt the tremors of market disruptions in China, felt the pinch of drought on our agricultural sector, witnessed the mass dispersion of Syrian refugees throughout Europe, seen the effects of US interest rate hikes, observed the unexpected outcome of a Brexit vote and, to top it all, we’re in the middle of socio-political turmoil on home turf.

We have, however, received a rather unexpected silver lining in the form of our municipal elections.

Before we turn our eye on the state of the global economy, it’s important to first analyse the outcome of the 2016 municipal elections.

The public vote in favour of more diversified municipalities seems to have swayed investor sentiment in favour of South Africa, with the Rand gaining massive strength against foreign currencies. And although the elections may not have dethroned the ruling party from their seat, there’s no doubt that a more competitive political race could serve as catalyst for a more accountable leadership.

The greatest question, of course, is what possible coalitions we can see in the near future – and how far the respective parties can fraternise before undermining their own ideologies and agitating their followers. The EFF has already warned that a coalition with the ANC would not occur without the removal of President Jacob Zuma. Although many view the electoral results as a wake-up call for the ruling party, others feel this is highly unlikely; they have had several reasons for questioning the legitimacy of Zuma’s rule before and have not acted on any of these before, so why would this change? Perhaps there is a greater strategy which we as the public aren’t privy to – as there usually is in politics.

In the poignant words of Richard Poplak, however, we need to remember that this vote was not necessarily an endorsement of either opposing party – it was a protest vote; it would serve us well to remember this.

Nevertheless, the waning strength of the ANC and rising popularity of the DA seem to be the fertile soil on which our economy is predisposed to growth. The key to this growth lies not in a reallocation of budgets – as there will not be much movement for new leaders of the respective municipalities and wards – instead steps toward positive change will in all likelihood occur on policy level.  A more competitive political arena will also cast a spotlight on either party’s performance and fidelity -hopefully keeping public servants in check. What does this mean? Well, it means we could expect less corruption, faster growth and better regulated civil service.

If anything, streamlined processes and trustworthy public servitude could form the foundation for recovering our weak economy.

We’re not out of the woods yet

Though many economists are popping the champagne, it would be rather premature to expect an instant recovery – if anything, the growing strength of opposition parties as well as the emerging animosity between the ANC and Cosatu could lead to even more political unrest and tension in the country.

One also needs to look at South Africa in a global context. The Rand has quite clearly recovered lost ground in the few days since the start of the voter count and we reclaimed our spot as Africa’s biggest economy, but we have to consider the long-term effects of worldwide economic instability.

We have to ask what Brexit, as well as the looming US presidential elections on 8 November could mean for South Africa. What does Australia’s possible credit downgrade mean for us? How will the Chinese trade drop affect our own economy?

Though weakening currencies definitely hold short-term benefits for South Africa, we should consider what strategies these countries will institute for recovering their own economies. Amidst prolonged economic turmoil, first world countries tend to take a more conservative stance when it comes to foreign investment and reassess their policies and trade relations.

It is therefore a waiting game. On the one hand, a stronger Rand, falling oil prices and interest rate cuts abroad in Australia and the UK paint a positive picture for the South African economy. On the other hand, we are yet to see whether our country will acclimatise to the new political diffusion, whether our credit rating remains unchanged and how market turmoil abroad will affect our foreign relations.

Finglobal.com has a team of specialists with extensive knowledge of cross-border financial services to assist you in making the right decision for your financial assets. We can provide sound financial advice and facilitate opening and closing of accounts in South Africa, tax returns, enquiries and refunds, offer you competitive foreign exchange rates and transfer the proceeds of your policies abroad – wherever you may be.

If you need help deciding the best route for your financial portfolio, simply leave your details and we’ll call you back.
[contact-form-7 id=”6581″ title=”Blog post (call me)”]