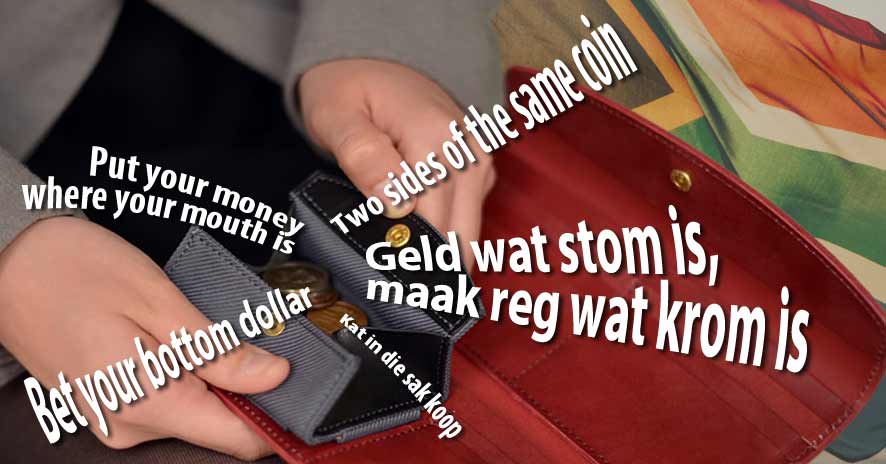 Whether you’re a teacher, financial adviser, cashier or simply need a saying to  tell your wife and kids to lay off the spending – we could all use a bit of eloquent financial savvy. Which is why it’s good to remember those idioms and sayings relating to the thing that makes the world go round. Money.

But why stick to one language? We’re give you a bilingual view of the money dictionary – so you can say it twice (in case you need some multilingual reiteration).

Afrikaans and English sayings about money

Meaning: If you’re willing to pay enough, you’ll probably get people to do what you want.

Side note: Money makes the mare go is from a nursery rhyme, though the original, which was written in 1609 and goes like so:

Will thou lend me thy mare to ride but a mile?
No, she’s lame goinge over a stile.
But if thou wilt her to me spare,
Thou shalt have mony for thy mare.
Ho ho say you soe
Mony shall make my mare to go.

Meaning: This idiom has the same as the one above – basically what we’re saying is you can get a lot more done if you have the money.

Meaning: This idiom concerns having to pay a lot of money or empty your financial resources when you can’t really afford it.

Meaning: Exactly like the English translation of the Afrikaans saying – it simply means you’re going to put a payment on account or tab instead of paying for it with cash.

Meaning: This saying simply infers you don’t need an exact amount – instead someone can just give you an estimate of how much something will cost or how much you owe.

Meaning: If you’re sitting around doing nothing you’ll probably be naughty.

Meaning: This saying means that someone is convinced something will happen – in fact, they will bet their last money on it, that’s how confident they are.

English variation: As poor as a churchmouse

Meaning: You know how poor you are if your finances are akin to a church mouse.

Two sides of the same coin

Meaning: This saying infers that two things are practically identical – they are so similar they could be the same.

English variation: Buy a pig in a poke

Meaning: Get a deal which wasn’t worth it or buy something which was a bad deal.

Put your money where your mouth is

Meaning: In accordance with the Afrikaans phrase, this saying means that you should not just talk, but also do what you said you’d do or bragged about.

Meaning: This saying concerns making bad investments or investing in a business which isn’t lucrative or feasible.

Be money for old rope/jam

English variation: Cash on the barrelhead/nail

Meaning: This is essentially the same as COD – or cash on delivery. The saying simply states that the only accepted payment will be cash,and nothing else.

So next time someone asks you to spend, earn or give away money – why not use one of your favourite South African idioms to tell them why it’s a good or bad idea.