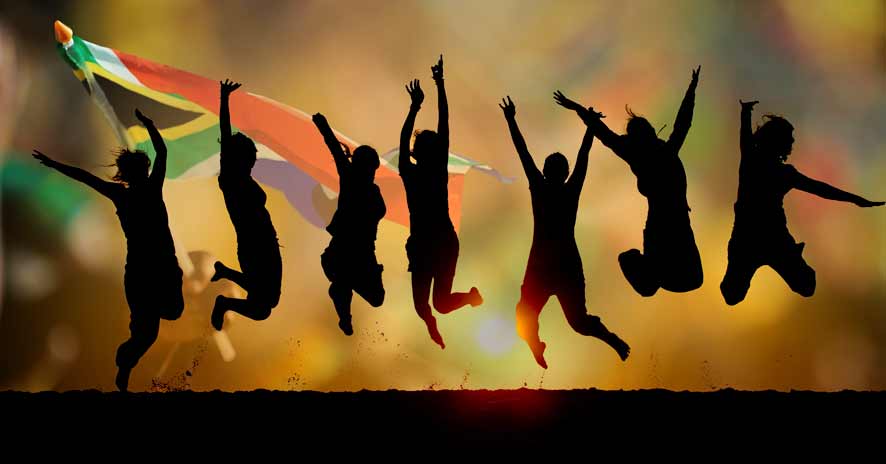 Today marks the anniversary of the Soweto Uprising – a pivotal point in South Africa’s history. For on this day, 40 years ago, a group of South African youths would take the reins from their parents and fight for their right to be educated.

Today, we honour those youths, and take a look at some of the young South Africans who make us proud.

If you’re anywhere online, then chances are you’re stumbling across a few WordPress sites every day. But have you ever wondered who’s behind those amazing themes – you know the pretty, responsive and oh-so chic themes you use to build your site or blog? Mayhaps, you’re using South African entrepreneur and co-founder of WooThemes, Adii Pienaar’s themes.

This 22-year old dancer has been called one of the most talented neoclassical and contemporary dancers in the world. Not only that, but Khoza was one of only seven international artists to be chosen for the 2016-2017 Rolex Mentor and Protege Arts Initiative. This initiative is aimed at bringing together the best artists in the world under seven disciplines – architecture, literature, film, music, visual arts, theatre and dance.

Few people are as passionate about helping South Africans as Jessica Dewhurst. As the social justice and advocacy desk coordinator for Edmund Rice Network South Africa and their international youth ambassador,

Marishane may be the CEO of Headboy Industries, but it’s his waterless gel bath called ‘Drybath’ which put him on the map as an innovator. This invention also saw him become the face of Remy Martin’s brand focused on multi-talented individuals with various talents, skills and passions. Additionally, he was named one of Google’s brightest minds in 2001.

With his name on Forbes’ ‘Africa’s most influential people under 30’ recently, it’s immediately obvious why Siya Beyile is on our list. He is the founder and creative director of The Threaded Man, an innovative online fashion and lifestyle hub aimed at the African man. With most of the online world aimed at most of western civilization, it’s understandable that Beyile’s initiative can be seen as a groundbreaking platform for today’s African metro man.

Known for: medicine on wheels

Iyeza Express is the brainchild of bicyclist Sizwe Nzima. Sizwe has helped more than 250 residents in townships receive their chronic medication. What makes his work even more important is that many of these individuals are too old or ill to make the long journey to the clinic each month. The word of his ‘service’ actually spread through word of mouth as his grandmother spread the news to others who had a similar need. He asks a mere R10 for the delivery service – an invaluable aspect of this philanthropic business to the less fortunate.

In addition to crime, climate change and politics – one of the most reported things globally is undoubtedly the fate of the bees. Luckily we have a few brainiacs among our ranks. People like Ivan Brown. As an industrial design student, Brown’s concrete beehive invention which has earned him a spot in the PPC Imaginarium Awards is aimed at changing the plight of bees and beekeepers worldwide.

Although no longer a youth himself, pro-skater Dallas Oberholzer couldn’t have known how much of an inspiration his skateboarding park would be for the youths of a Valley of a Thousand Hills. In the heart of Isithumba, KwaZulu Natal, he established the Indigo Youth Movement, which is aimed at uplifting youths and keeping them out of trouble through sportsmanship and activity. The initiative has already seen several youths train and become trainers themselves.

Girls don’t always make it in the gaming world. Well, that’s a bit of an understatement. But you’d think different if you got to meet Pippa Tshabalala. Starting of as a presenter on The Verge – a locally produced video game show, she’s only going up in the world. Tshabalala has a master’s degree in animation and is brand ambassador for Adidas. In addition, she’s a writer for NAG, Gamecca, Girl Guides, Obrigado and Gearburn. She’s also become an online producer because, you know, girls can multitask.

Are you as excited as we are to see South African champ break some records in Rio this year? Of course you are. Not only has van Niekerk broken several personal and international records, but he is currently ranked in the third all-time place for the 300 metres – with only Usain Bolt and Michael Johnson having ever had faster times than him.

Kgatlhanye, who is also the CEO of Rhetaka Trading, has even been endorsed by Microsoft founder, Bill Gates. The inspiration for Kgatlhanye’s backpack came from having to study after school in rural areas where there’s no electricity. The backpack harvests the power of the sun to create artificial light. In addition to the solar aspect of the bag, it is also created from recycled plastic bags, making it even more eco- and community friendly..

If you’ve ever wondered whether you’ll achieve anything, just look to South African COO and co-founder of Web Africa, Rupert Bryant. Bryant left school at the tender age of 14 and went on to become one of the most influential businessmen in South Africa and Africa.

At age 15 while participating in her first international archery tournament, Natacha Kroon wowed all by becoming the IFAA Junior Female Freestyle Unlimited Champion of the World. The International Field Archery Association’s World Bowhunter Championships took place in Godollo, Hungary in August 2015 and saw more than 1 300 entrants. We can’t wait to see what Natacha has up her sleeve for the next few years.

How would you like to be a CEO at the age of 28 with more than 80 staff and more than 60 000 clients? Well, that’s exactly what iFix founder, Alex Fourie has achieved. In 2014 he made the Forbes ‘Top 10 Promising Young African Entrepreneurs’ list, and he has gone from strength to strength.

As MD of Dad Fund, Ezlyn’s passion is undoubtedly in leadership and mentoring. With a bachelor’s degree in Business Administration in Entrepreneurship and Marketing and a Higher Diploma in Marketing Communications Barends is changing the world. And she’s not letting anything hold her back, she’s also been named one of Mail & Guardian’s 200 Young South Africans.

We wish we could name all the amazing South African youths who are making a difference out there, but the list would be enormous. Instead, we’d simply like to thank each and every youngster, adolescent and young adult for their amazing contribution to the world. The future is yours!