Home » Economic focus: is your money safe in South Africa?

Economic focus: is your money safe in South Africa?

Home » Economic focus: is your money safe in South Africa?

Economic focus: is your money safe in South Africa? 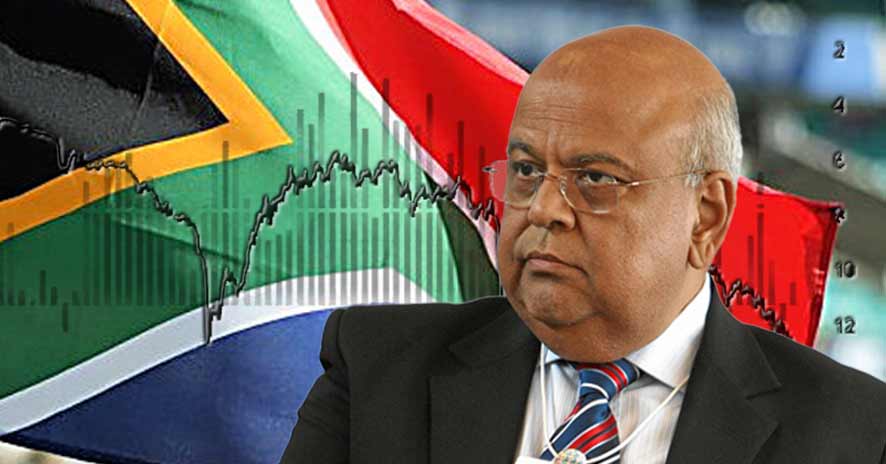 As if South Africa’s economy hadn’t been dealt enough blows in the past few months, news that finance minister Pravin Gordhan and eight other officials face possible arrest seemed to be the final nail in our downgrade coffin.

Although Gordhan is adamant that the accusations against him are false and merely a additional conspiracy, the battle faced by him and all South Africans could prove to be a long and laborious one. In a statement to the public, the DA said that a possible arrest would be “an economic earthquake and would make 9/12 look like a minor economic tremor”.

Luckily, the Hawks revealed at the weekend that, for the time being at least, they would not be prosecuting Pravin Gordhan. Although this news will undoubtedly provide some interim stability for the currency, the past few months have not served to quell investor fears. In fact, the Rand hit another two month low after news reported on the possible prosecution of the finance minister.

Where are we headed?

One of South Africa’s few lifelines at the moment seems to be the stabilisation of US stocks and rise in precious metal prices which could give the suffering South African mining industry a needed boost. Lonmin shares have improved and investors have increasingly been pooling funds into gold in particular, including billionaire financier George Soros. But if you consider the fact that South African miners are to pay a $760 million levy on toxic water pollution in the next ten years, the picture does not get much brighter.

Federal officials have also stated that the U.S. central bank could raise short-term interest rates at its meeting next month which will impact the South African economy further, and particularly the exchange rate.

David Shapiro of Sasfin Securities has analysed the economy over the last five years and was shocked to find just how far the South African economy has ‘gone down the tubes’. An analysis measuring the gap between the JSE and the S&P 500 has shown a 80% gap when measured in hard currency. This analysis indicates a shocking 120% decline in the value of the Rand in the last five years.

The graph below indicates a 28% investor loss over the last 12 months for a hypothetical investment of $10 000 in the iShares MSCI South Africa ETF. 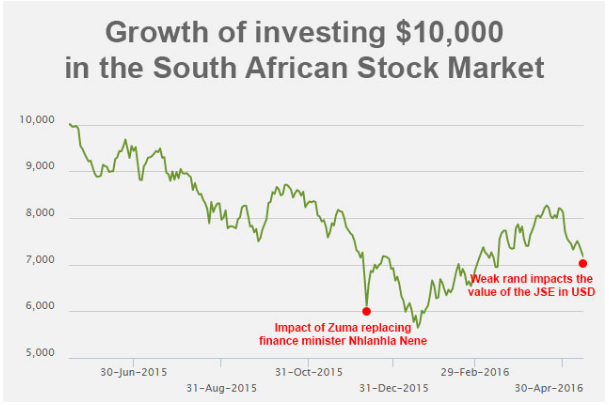 The final straw seems to be South Africa’s current socio-political climate, which has pitted the public against the country’s political leaders, and its leaders against each other. There are tremors within the ANC itself, and uproar in parliament from the likes of Julius Malema, Mmusi Maimane and their comrades. There are service delivery protests, wage increase demands, legitimate educational sector uproar and fear is spreading like wildfire. The faults are being fanned by the upcoming elections.

It is always difficult to predict the future, but the downside risk seems to have increased over the last few months.

A country in the grips of disillusionment

As political battles play themselves out in parliament, schools are torched, and the Rand struggles to hold its last footing, the country seems caught up in disillusionment. Countrymen are finding it ever harder to find that silver lining – it’s not easy to know which way to turn, or what your options are if you’re still living within country borders.

But those who are living overseas have some options available to them. Moving your money across borders, at least until the dust has settled, seems to be the safest and most logical recourse right now –  while policymakers and investors play a last desperate hand and the elections run their course.

Want to move your money to safer shores?

If the economic crisis in South Africa worries you, why not take the opportunity to move your money offshore? finglobal.com can assist you with anything from retirement and pension fund transfers to South African tax services and foreign exchange.