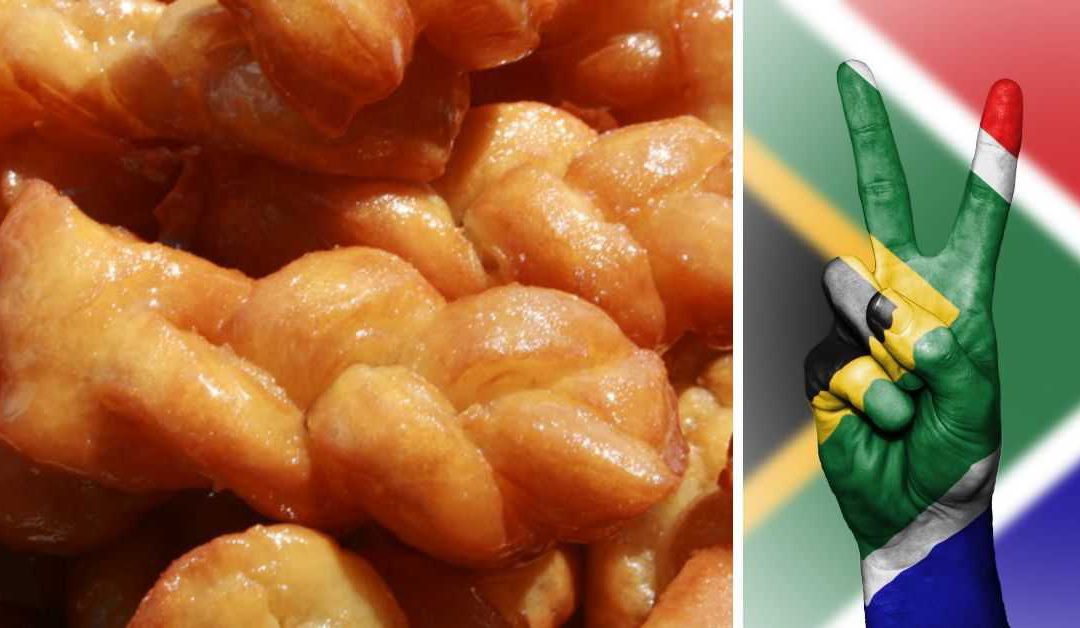 Can there be a more traditional South African treat than a Koeksister? These delicious twisted pieces of pastry soaked in syrup are a favourite teatime treat and every family has their prized koeksister recipe handed down from generation to generation.

The history of the koeksister

The word koeksister is of Dutch origin, from the word ‘koek’, which literally means a wheat flour confectionery and is also the origin of the American word cookie. The word ‘sister’ originates from the legend of two sisters working together and plaiting the doughnuts and then dunking them in syrup. Others claim that the ‘sis’ part of the word refers to the sizzling sound of the oil when the dough is dipped into it.

The Koeksister is made by deep-frying dough and then dipping it in cold sugar syrup. South African traditionally has two types of koeksisters, the Afrikaans version and the Cape Malay version. The Afrikaans version is crispy on the outside and has a lot of syrup on the inside while the Malay version is spicy and soft, almost like a doughnut and is topped with a sprinkling of coconut.

The origins of the Afrikaans koeksister

The Afrikaans koeksister has an intricate past. Apparently, two recipes were brought to the Cape by Dutch settlers. One recipe was for a fried treat, similar to a doughnut and the other was for a thin bowtie-like dessert made out of pasta dough. Eventually an inventive person started combining the two recipes and began braiding the dough instead of leaving it in a little ball. The official name for the treat in the 18th Century was “koeksusters” and the name was changed to “koeksisters” in the 20th century.

Making the perfect koeksister can take a while to accomplish and practise makes perfect – but we guarantee that even the less-than-perfect ones taste delicious!

How to make koeksisters:

INGREDIENTS FOR THE SYRUP:

INGREDIENTS FOR THE DOUGH:

Heat the sugar and water in a pot over medium heat until the sugar has melted, stirring continuously. Add the cream of tartar, ginger and cinnamon sticks to the syrup and bring to a boil. Boil uncovered for 5 minutes (don’t stir). Remove from the stovetop, transfer to a stainless steel bowl and remove the cinnamon sticks. Place the bowl into an ice bath to cool the syrup down. Once it’s cool, divide the mixture between 2 bowls (the reason for this later) and chill in the fridge until ready to use.

Sift the dry ingredients (flour, baking powder and salt) into a mixing bowl. Add the butter into the flour mixture. Rub until the mixture resembles fine breadcrumbs. Set aside.
Beat the eggs and milk together in another bowl then add it into the flour. Mix the dough well and then knead for 2 minutes before covering and allowing it to rest for 1 hour.
When ready, roll the dough out into a rectangle. It should be about 1 cm thick. Next, cut the rectangle into strips about 4 cm wide (they can vary in length depending on whether you want large or bite-size koeksisters.)

Koeksisters are done in 2 ways: Twist 2 strands of dough together or braid 3 strands together. Twist/braid until all the dough is used.

FOR THE FRYING AND DIPPING:

Heat the oil in a heavy-bottomed deep pot (use enough so that when you put the koeksisters in, they will be fully immersed) to 375 F (190 C). Drop 2 koeksisters in at a time and fry for 1 minute. Flip them over halfway through frying so they brown evenly. With a slotted spoon, remove the koeksisters from the oil and allow to rest for 1 minute on some paper towels.

Pull out one of the bowls of syrup. After 1 minute of resting, drop the koeksisters into the chilled syrup for 1 minute. Note: the syrup is best if it’s kept chilled so swap out the bowl of ‘warmed’ syrup for the other bowl of refrigerated syrup every few minutes. After 1 minute of soaking, fish the koeksisters out the syrup and place on a cooling rack to allow excess syrup to run off.

Repeat this process until all the koeksisters are fried, rested and dipped. Enjoy for dessert or as a treat with coffee.