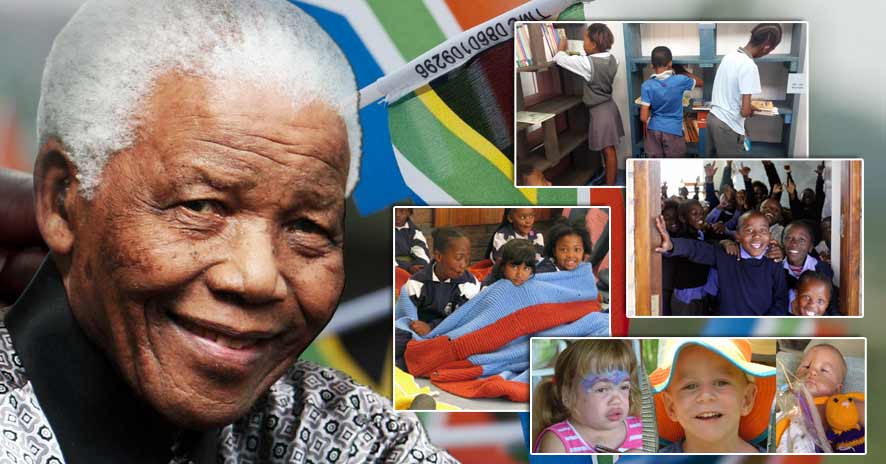 Each year on the 18th of July, South Africans roll up their sleeves and give 67 minutes (or more) to volunteer and help those less fortunate than them. But where does it come from and why does everyone pitch in on this day in particular?

We’ll give you the scoop. First though – let’s take a look at why giving is so important.

Why giving is good for you

Of course, giving is most important because it helps the community – our empathy and charity to those around us has the power to significantly alter and improve the lives of others. Empathy is said to be an evolutionary benefit which came about through a need for survival.

It started through ‘pair bonding’ which allowed parents to nurture their young – this computational requirement brought about an enlarged brain which allowed vertebrates to tune into the signals of their young. The primate species’ brains became even larger and more complex – this attribute is said to be a result of tight-knit social groups and allowed them to build alliances, adversaries and social politics. Then came our human ancestors, hominids, who were under pressure to develop teamwork in order to survive – through empathy they were able to work together, help each other survive and prosper.

In short – empathy became a way for people to survive. Through learning how to give and receive the human race has survived and prospered.

As a learned skill, this empathy can be developed in others through a focus on the needs of others – it is something which comes natural to us, but can also be expanded and grown to become daily habit – we become better at giving by giving more.

But this is not the only reason why giving is important. In addition to charity changing the lives of individuals and communities, it is good to give on a much more personal level.

According to the book, The Paradox of Generosity, people who volunteer a mere 5.8 hours per month are significantly happier than those who volunteer less or don’t volunteer at all. In addition to this, people who are more emotionally available and hospitable to others are far more likely to be in excellent health.

The International Journal of Psychophysiology states that giving significantly lowers blood pressure and helps people recover from coronary-related events. Not only that, but a study by Berkley found that people over the age of 55 who volunteered were 44% less likely to die over a five-year period than those who didn’t volunteer.

The fact is, giving has biological benefits since it activates regions of the brain associated with pleasure, connection and trust. It stimulates the mesolimbic pathways – the reward centre of the brain – by releasing endorphins and creating a ‘helper’s high’ which has been found to be addictive. The more you give, the happier you feel, and the more you will feel compelled to give even more.

Where does Mandela Day come from?

18 July marks the birthday of our departed president, Nelson Mandela, who died on 5 December 2013. The United Nations declared the date Mandela Day in November 2009, and it was celebrated for the first time on 18 July 2010.

The day brings together individuals across the globe in a shared initiative – to change the world. This year’s Annual Nelson Mandela Lecture saw Bill Gates address attendees and discuss the challenges, opportunities and responsibilities which each of us face in making the world a better place.

What is Mandela Day about?

This international observance is aimed at motivating global action for transforming the world. In line with the life and legacy of one of the greatest leaders our time has seen, who spent 67 years in jail, the day calls for everyday people to dedicate 67 minutes of their day to serving their community.

It is a day of coming together, fighting poverty, promoting peace, reconciliation and cultural diversity. The day celebrates the ability of ordinary people to elicit change and action positive movement amidst adversity.

Our actions, no matter how big or small, could affect others and make positive changes in society. The Nelson Mandela Foundation focuses on the following areas in particular:

Some of the featured actions of the foundation include:

A community clean-up whereby residents and volunteers can clean the township streets. There will also be entertainment for impoverished children and food hand-outs to homeless people.

Rare disease patients usually spend numerous days in hospital and are admitted unexpectedly, the #RareCare hospital packs are aimed at helping patients through this time and bringing positive light to their lives.

Skipping Champs is aimed at teaching youths to look outside their circumstances and seek positive pastimes. Through skipping, the community is brought together and motivated to participate in all kinds of sporting codes in order to grow and experience the magic of team spirit.

Bikers from across South Africa, including DJ Fresh, Zelda la Grange, Angie Khumalo and Alex Caige will embark on the seventh annual Bikers for Mandela Day to support victims of Gender Based Violence (GBV) in South Africa and restore their confidence.

The Mandela Long Walk to Freedom team congregated at Ebomini Primary School to open the Mandela library which provides free-of-charge fiction and non-fiction books and magazines to the local community. The library also has reading charts, colouring books, crayons and puzzles.

Ahead of Mandela Day, SC Johnson provided 1 120 pairs of new school shoes to Lethabong Secondary School. The project, dubbed Shoes for Champs, is aimed at giving school children dignity and pride through high-quality school shoes and relieving the financial burden for parents.

The annual 67 Blankets initiative, started by the Zelda la Grange and KnitWits for Madiba, is aimed at individuals creating 67 blankets for people in need. Last year the foundation donated 10 324 blankets covering 17 181 square metres were distributed to local communities.

Listen to Nelson Mandela’s quote about change being in your hands.

We hope you will find it in your heart to give to others and become part of the movement to make the world a better place.