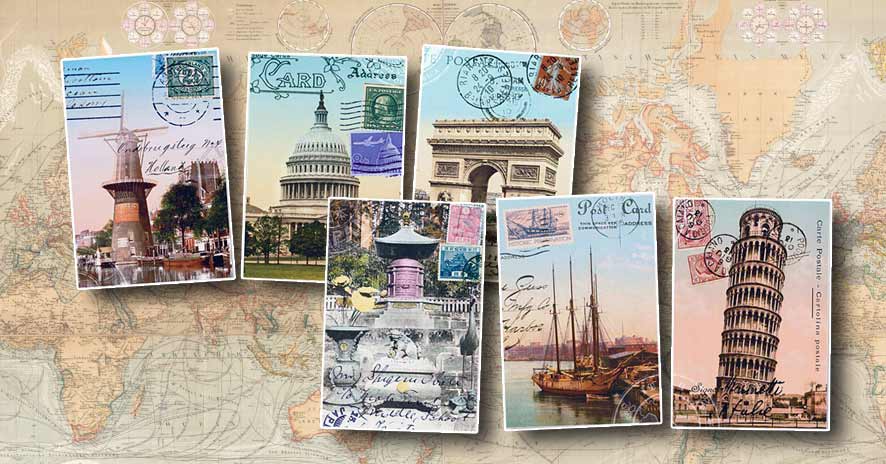 In this week’s Travel Tuesday feature, we’re continuing our trip around the globe, starting with Saint Kitts and Nevis. Although there are 196 countries in the world, we’ve broadened our view a bit and included other debated territories.

So buckle up and sit tight – this is around the world in 235 facts, continuing from fact 177.

178. Saint Kitts and Nevis
Nevis, which is the smaller of the two islands, is practically a big mountain (985 metres high), surrounded by coral reefs. If you’re wondering where the name comes from, Kitts stands for Christopher, as the full am of the islands is Federation of Saint Christopher and Nvis.

179. Saint Lucia
The largest exports of this Windward island are bananas, clothing, vegetables, cacao and coconuts. Castries, the capital of Saint Lucia, is actually a reclaimed land mass located in a flood gut region.

180. Saint Vincent and the Grenadines
Kingstown, the capital of St Vincent and the Grenadines, is also called the ‘City of Arches’ as it contains more than 400 arches. The islands are also home to the oldest Botanical Gardens in the Western Hemisphere. Within these gardens, the original sucker from the breadfruit which Captain Bligh (Mutiny on the Bounty) brought to the islands can still be seen.

181. Samoa
Samoa is an independent state consisting of a group of islands in the South Pacific. Over half the population of Samoa is obese as it is seen as a symbol of health, wealth and happiness to be overweight in Samoa.

182. San Marino
San Marino is a country within a country, much like Lesotho, and is surrounded by Italy. It is considered to have the oldest written constitution which is still in effect of any country in the world. Although San Marino remained neutral during World War II, it was briefly occupied by German forces, who were defeated by Allied forces in the Battle of San Marino.

184. Saudi Arabia
The Saudi king’s title is actually ‘Custodian of the Two Holy Mosques’. The country is the largest one in the world which has no river. Construction of Jeddah Tower (previously King Tower and Mile Tower) is underway and on completion, the tower will be the tallest building in the world, at 1,6 kilometre high.

185. Senegal
This vibrant African nation was the first in the world to ratify the treaty establishing the International Criminal Court. It is, surprisingly, one of the few countries where prostitution is legal – but there are laws regulating the prostitution and all prostitutes must be above 21, go for regular medical checkups and carry a sanitary card. According to WHO, the legalisation has contributed to it being one of the countries with the lowest incidences of AIDS in Africa.

186. Serbia
Serbia is the largest raspberry exporter in the world (90%+ in total). The country has contributed only one mainstream word to the international languages, namely ‘vampire’. Europe’s largest gorge, through which the Danube river flows, is located in Serbia (Djerdap Gorge).

187. Seychelles
Seychelles used to be a pirate hideout and it is said that the famous pirate Olicier Levasseur hid a treasure which still has not been found. It is home to the largest seed in the world, the coco de mer, which is a nut that can weigh up to 15 kilograms.

189. Singapore
One range of the Singapore banknotes dubbed the Portrait series, has the entire Singapore anthem printed on it in microprint. It

190. Slovakia (Slovak Republic)
Although there’s evidence of human settlement around 22 800 years ago, which makes it one of the oldest civilisations, it is one of the newest independent countries, having obtained democratic independence in 1993.

191. Slovenia
About 60% of Slovenia is covered in forest territory and, unlike other countries in the world, the forested territory is only growing, as the country plants approximately 1.2 million trees each year. The country is said to have 1 vineyard for every 70 people and it’s also home to the oldest vine in the world.

192. Solomon Islands
Although residents of the Solomon Islands most have dark skin up to 10% of them have blond hair. The world’s largest saltwater lagoon, Marovo Lagoon, can be found in New Georgia.

193. Somalia
Though Somalia is generally known for its poverty and famine, few people know that Somalia is also known as a great tourist nation. Many businesses and grand events are kickstarted by the reading of a poem. It is a great trader’s nation, particularly when it comes to livestock – which they trade mostly with the middle east.

196. Spain
After Chinese, Spanish is the most spoken language in the world, with approximately 414 000 000 speakers across the globe. According to the UN, Spain will be the world’s oldest country by 2015, with more than 40% of the population above 60.

197. Sri Lanka
Cricket may be one of the most popular sports in Sri Lanka, but the national sport is, in fact, volleyball. Although discovered by the Egyptians, cinnamon originated in Sri Lanka, so thank your lucky stars for Sri Lanka next time you eat that melktert or melkkos.

198. Sudan
Before splitting into two, Sudan used to be the biggest country in Africa and the Middle East. About 73% of the country’s income comes from oil exports. Since the country used to be part of the Egyptian realm, it is no surprise that it has more ruins and pyramids than Egypt itself (although not at home).

199. Suriname
Suriname is the smallest country in South America, both in size and population. If you are under the age of 30, it is illegal for you to get married in Suriname without the written consent of your parents. Dutch is the official language of Suriname.

200. Swaziland
Swaziland, which is also known as Ngwane, is the smallest country in Africa – aroung 200 km north to south and 130 km across.

201. Sweden
The Swedish people pay some of the most tax in the world, but they are happy with this taxation in general. The three-point seatbelt which is found in most cars, was invented in Sweden and it is claimed that it has saved over 1 million lives.

202. Switzerland
Switzerland is also known as Confoederatio Helvetica, which is why it has the abbreviation CH. More than half the country’s electricity is produced by hydroelectric power plants (around 556 plants). You will also find the world’s largest article physics laboratory in Geneva (between the Swiss and French border).

203. Syria (Syrian Arab Republic)
Syria has been in the news a lot lately due to the Syrian Civil war, which is a conflict between the Assad family (who has ruled since 1971) and their supporters against those wishing to oust them. The city of Aleppo in Syria is the oldest Citadel in the world – at around 5 000 years.

205. Tajikistan
The countries of Tajikistan, Uzbekistan and Kyrgyzstan share a common area called Fergana Valley. Over 90% of Tajikistan is mountainous and most of the country is above 3 000 metres high.

207. Tibet
The Tibetan Government-in Exile is not recognised by any country in the world, as Tibet is seen as most governments as a Chinese territory. Regardless, the Dalai Lama has received the Nobel Peace Prize for his efforts to liberate Tibet. Of course, it’s also jointly home to the world’s highest mountain (with Nepal), Mount Everest.

208. Timor-Leste (East Timor)
East Timor is one of only two predominantly Christian nations in Southeast Asia. It consists of mostly mountainous regions and is comprised of the eastern half of the island Timor as well as nearby islands. The Cristo Rei of Dili statue, which is 27 metres high, was a gift from the Indonesian government to the people of East Timor.

209. Togo
Togo, or the Togolese Republic, is one of the countries with the least immigrants. Its population is made up of 99% Togolese. Most of the citizens follow traditional indigenous beliefs, with only 49% believing in mainstream faiths like Christianity or Islam. It is the fourth largest producer of phosphate in the world.

210. Tokelau
Tokelau, which is also known as Union Islands, consists of three atolls: Atafu, Nukunonu and Fakaofo. It is a dependency of New Zealand, which grants Tokelauans automatic NZ citizenship (since 1948). They believe in subsistence farming, which means coconuts and fish are only used for survival, not for commercial value.

211. Tonga
Tonga is a constitutional monarchy ruled by King George Tupou V. In 2003 the king sued his official court jester, Jesse Bogdonoff, who also happened to be his financial adviser at the time.

212. Trinidad and Tobago
As of 2012, the Trinidad moruga scorpion pepper is known as the world’s hottest chili. It contains heat more than 1.2 million SHUs. If you want to see the world’s largest natural asphalt deposits, then visit La Brea in Trinidad – where you can see Pitch Lake. It is approximately 40 big and 75 metres deep.

213. Tunisia
Tunisia, the most northern country in Africa, has only ever had two presidents. The country is famous for its Roman archaeological sites like Carthage, but the city of Kairouan is the fourth most important in Muslim faith.

214. Turkey
80% of the world’s hazelnut exports come from Turkey. If you’re in the mood for a shopping experience, it is said that Istanbul’s Grand Bazaar is the place to go – this shopping paradise has 64 streets, 4 000 shops and 25 000 workers.

215. Turkmenistan
The country may be famous for its carpets and for 80% of its land being covered in Karakum Desert, but what many people don’t know is that Turkmenistan boasts one of the highest literacy rates in the world. As of 2008, it had a 100% adult literacy rate. One of its greatest cities, Merv, used to be known as Alexandria, and was founded by Alexander the Great in 330 BC.

216. Turks and Caicos Islands
Many people mistakenly believe Turks and Caicos islands to be in the Caribbean Sea. It is, in fact, located in the Atlantic Ocean. The name also fools some people into believing the people may have some affiliation with the Turkish, but most citizens are actually of African slave descent.

That’s it for this week’s edition of around the world in 235 facts. Check in again next week where we’ll cover some more of your favourite country trivia.