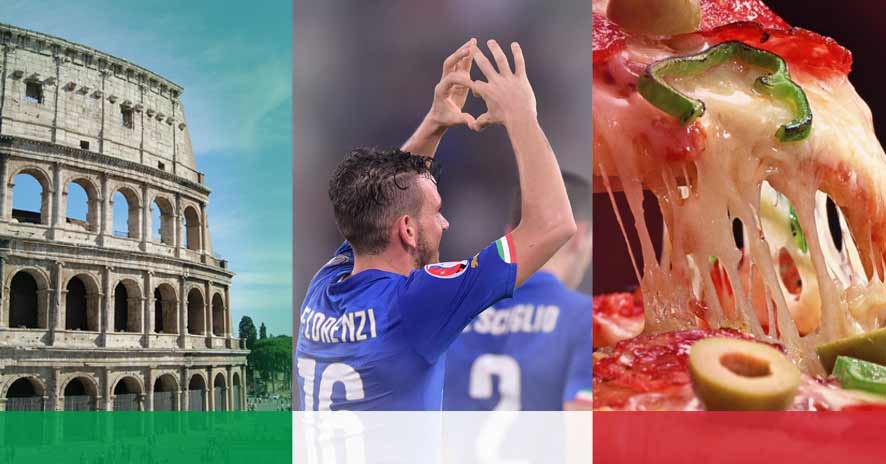 We’re on issue number five of the cashkows’ #ReasonsToImmigrateTo blog. This week we travel across continents from Brazil to Europe – and Italy more specifically.

Are you wondering why expats choose to immigrate to Italy? Well wonder no more, as we’ll give you the low-down on the pull factors which draw international migrants to this destination. Each of us are different, and so what appeals to Mary next door may not appeal to you. So perhaps Italy is exactly what you’ve been looking for.

South Africans generally choose to immigrate to a country where they understand the language and the culture is similar to ours, but there are also those among us who want to choose a relocation destination which offers us something new and exciting. If this is you, then perhaps Italy is the place for you. Take a look why others love this country so much.

It’s all about romance

If you’re moving from South Africa, chances are you need something to soothe your soul. Many of us over-romanticise our end destinations, but when it comes to Italy it really is all about the romance. In fact, among the top 10 romantic cities in the world, Italy has two entries – with Venice at number one and Rome in fifth place. It’s not hard to see why Italy is a favourite destination for single immigrants and couples as everyday is said to be a fairytale. Let’s not forget that the most well-known romantic tale, Romeo and Juliet, is set to the backdrop of Verona in Italy.

Cycling is the name of the game

According to Huffington Post and Pure Adventures, Italy is the place to visit or stay if you’re an avid cyclist. The rolling hills and beautiful countryside simply lends itself to cycling. In addition, travel experts say that touring on a bicycle is also the best way to explore this amazing country. There’s the Sicily Historical cycling tour, the Tuscany Wine & History bike tour, the Piedmont Wine Country Cycling Tour, the Tuscany Cycling Tour Escape, The Baroque Sicily Bike Tour, Dolomites to Lake Garda Cycling Tour, Etruscan Treasures Biking Tour, Veneto to Venice bike tour and Puglia 7 Nights Cycling Tour to choose from.

Of course, one cannot talk about Italy without thinking of the history of Rome, the colosseum, ruins, cathedrals and other cultural gems. It’s understandable then that Italy is ranked first in the world when it comes to heritage, and second for cultural influence. The country has over 51 world heritage sites – the most in the world – the reason for over 40 million tourists visiting it each year. People who love their history will be awestruck by the remnants of Greek, Etruscan and Roman civilisations scattered throughout this amazing land.

So you’re not into all that art and architecture stuff? Well no worries then, as you’ll find your home in the fashion capital of the world, Milan! Italy is one of the leading fashion countries – both for designers and buyers. The Italian adage, “la bella figura” (good impression), is one which most citizens prescribe to. So if you’re all about trending, being well dressed and making an impression, then you’ll definitely come right in Italy.

Do you know Leonardo da Vinci? Of course you do. How about Michelangelo, Raphael or Donatello? No, we’re not talking about the ninja turtles, we’re talking about the most famous artists in world history, who all happen to be Italian. In addition to the abundance of museums, many artists are drawn to Italy due to the way it embraces and encourages artistic pursuits. Not only that, but the country simply lends itself to landscape painting and drawing – there’s hardly a location which isn’t begging to be immortalised under your paintbrush or pencil.

Thank you for the music

In addition to its rich cultural, art and architectural tapestry, Italy has also a heritage filled with the love of music. Music is essentially one of the foremost cultural markers of Italian identity and holds importance in its society as well as its politics. Politics? Yes, that’s right. Italy’s musical identity is intertwined with its political history with its leaders often commissioning songs for courts, coronations, birth of royal heirs, royal marches and it has been used by leaders to forge a unifying cultural identity during the unification of the peninsula. Some of the greatest names in music hail from Italy, including Antonio Vivaldi, Giuseppe Verdi, Giacomo Puccini and Claudio Monteverdi.

Bring on the Foosball

Ah, Italia, a country synonymous with football. And supporters of this sport will simply love to live in this country where the men’s team is ranked 2nd in the world (FIFA World Rankings) and 4th in the world in the World Football Elo ratings. The National Team has won the FIFA World Cup four times, trailing only behind Brazil. And of course there are the football clubs like AC Milan, Juventus (ranked 4th in the world), SSC Napoli, Roma and Inter Milan.

So Vatican City may not technically be part of Italy, but we still associate it with Italy. As the smallest ‘country’ in the world, this religious hub in the middle of Rome is a mere 100 acres. But it’s not the only destination Christians flock to to experience the rich religious heritage of Italy. There’s Venice, with more than 200 churches and 8 basilicas, the Saint Anthony’s Basilica in Padua, the Holy Shroud at the Cathedral of Torino, the pilgrimage site at Loreto, the Holy House, purported birthsite of Jesus, Montecasino, Assisi, Pompeii, Firenze and more.

It’s no secret, the Italians love their cars. Think Ferrari, Lamborghini, Maserati, Alfa Romeo, Lancia and Fiat. Italians simply love their cars, especially fast, furious and luxurious rides. In fact, driving along the Autostrada in Italy, car lovers will certainly get their fix – the beauty of their cars is said to be equal to that of their men and women. They even have a patron saint of motorists, St. Francesca Romano.

There you have it – just a few reasons why Italy may be the place for you! Do you have any more suggestions, opinions or tips for South Africans moving abroad? Send yours to info@finglobal.com.