Home » #TravelTuesday – places that are most like South Africa

Home » #TravelTuesday – places that are most like South Africa 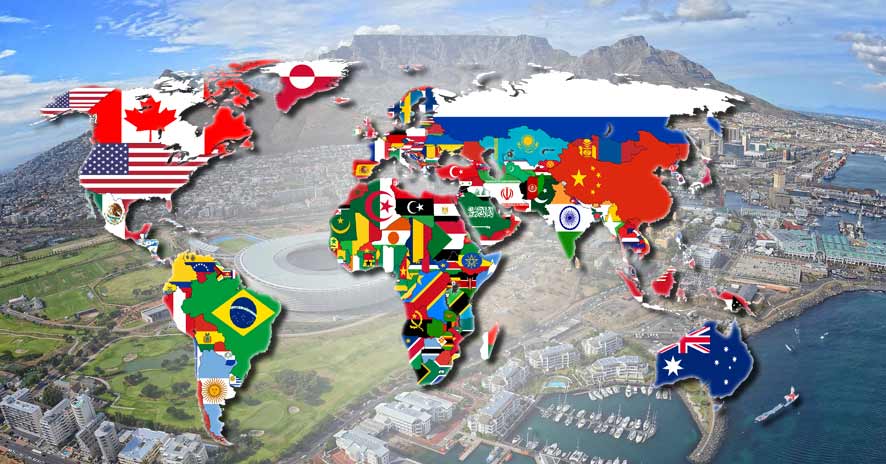 Welcome back to this week’s finglobal.com Travel Tuesday feature. We are travelling across the globe today – looking at destinations which are most similar to South Africa based on different criteria.

So if you’re looking for a travel location which reminds you of your home, then take your pick of one of these destinations.

South Africa compared to the world

South Africa is classified as semi-arid, Mediterranean and subtropical with sunny days and cool nights in most of the country. Our average precipitation in depth (mm per year) is about 495, which is similar to Israel (435), Russia (460), Australia (534) and Fiji (536). For countries with climates most like South Africa you can look to Australia, USA, Argentina and Spain.

South Africa is one of the hottest tourist destinations in the world. But which countries compare to us when it comes to its tourism industry? If you are looking for a destination which ranks near South Africa on the Travel & Tourism competitiveness index, then you want to visit Barbados, Poland, Bulgaria and Indonesia.

South Africa’s clocks in at position 49 on the World Health Care index. If you are interested in countries with similar health care systems to ours, then look no further than Macedonia, Croatia, Greece and Slovakia. When it comes to the overall ranking of our healthcare system, South Africa is similar to Cambodia, Guinea-Bissau, Swaziland and Afghanistan.

Okay, so you won’t really find a country like South Africa when it comes to our language. Though there are a lot of countries with South African expat groups, most of our languages are indigenous and are only spoken within our borders. There are, however, a few neighbouring countries you can visit which speak some of our native tongues. 90% of the population of Botswana speak Setswana, for instance, while Namibia’s population is 11% Afrikaans and 48% Khoekhoe. You will find many Tsonga, Zulu and Afrikaans speakers in Swaziland and, of course, Lesotho citizens speak mainly Sesotho. If you’re willing to travel a bit further, the Netherlands is a place where many Afrikaans speakers will feel at home.

Okay, so most of us want to visit places which have better internet connectivity than South Africa. But what if new things scare you and you just want a place where you can expect the South African average of 3.7 Mb/s? Well, you’re in luck because we can point you in the right direction. Countries with the same average connectivity speeds to South Africa are Brazil (3.6 Mb/s), China (3.7 Mb/s) and Ecuador (4.1 Mb/s). But of course, you also want to know what amount of time you will actually get connectivity above 4 Mb/s right? South Africa’s average is 22% of the time. Countries with similar averages include Indonesia (17%), Vietnam (31%) and Costa Rica (20%).

Freedom of the press

If you’re looking for a country where you will receive impartial news and can be sure that the media and internet shares information with you which is relatively unbiased – like South Africa – then your best bets are Brazil, Australia, Argentina, Kenya and the UK. These countries have a similar freedom of press to South Africa.

South Africa has many different religions, but the majority of South Africans (79.8%) practice some form of Christianity. Countries with similar religious convictions to most South Africans (predominantly protestant Christians) are New Zealand, Alaska, Sweden, Zimbabwe and Papa New Guinea. If you’re not too concerned with the type of religion, and simply want your people to be those with a similar level of faith as you (South Africa is ranked as Average), then you can look to Mexico, India, Kazakhstan and Peru.

If your travelling is motivated by working abroad, then perhaps you are looking for a place with similar career prospects. South Africa is currently ranked 23rd in the world when it comes to the best countries to start a career. We clock in just under the Czech Republic and Turkey, and just above New Zealand and Malaysia.

Those interested in economic growth prospects can look to Togo, Swaziland the UAE and Latvia for countries which are similar to South Africa. According to Nationmaster, South Africa’s annual growth forecast based on constant local currency is 5.36% with Togo coming in at 5.7%, Swaziland at 5.65%, UAE at 5.32% and Latvia at 5.14%.

Another economic indicator which may be a driving force for visiting or relocating to a country may be the GDP per capita. If you’re looking for a destination which is similar to South Africa, then you may consider Saint Lucia, Belarus, Saint Vincent and the Grenadines as well as Cuba. All these countries come in around the South African GDP per capita of R155 302.51.

Those looking for destinations where the countries have a similar infrastructure to South Africa’s will want to visit Mexico – which has a total road network which is just 10 000 km longer than South Africa’s (364 131 km) while Botswana and Costa Rica’s average motor vehicles per 1 000 people is around the South African average of 0.165. When it comes to the quality of our infrastructure, South Africa is ranked just below Namibia and Ecuador and just above Ukraine and Jordan.

Government expenditure on education (% of GDP)

Looking for a home away from home with similar democratic rankings to South Africa? Well then you may want to visit Chile, Brazil, Italy, Greece and Estonia. Other republics with democratic governments include the Republic of Korea, Timor-Leste, Nepal and the Democratic Republic of Congo.

Did you know that Forbes ranked South Africa the third friendliest country in the world in 2012? It’s true! Apparently our people are some of the friendliest in the world. If you want to find similar countries, then look no further than Australia (2nd), New Zealand (1st) and Canada (4th).

Sport is BIG in South Africa, so of course we’re interested in countries with similar sporting ranks to ours (since we’re SO competitive). Well, South Africa ranks fifth among Australia, India, Sri Lanka and England in cricket. We’re in seventh place in golfing, right below Japan and Spain and above Ireland and South Korea. And when it comes to rugby, we’re currently in 12th position just above Scotland and below Samoa.

We hope you’ve enjoyed your trip around the world. Check in again next Tuesday for your finglobal.com #TravelTuesday feature.