Home » Favourite meals from around the world

Favourite meals from around the world

Home » Favourite meals from around the world

Favourite meals from around the world 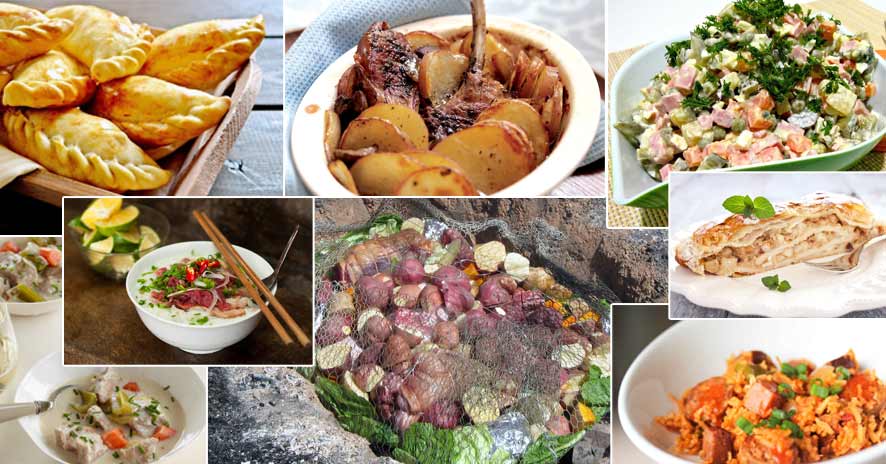 In South Africa we love our pap and wors. And if you’ve emigrated to another country, you’re probably be craving some biltong, melktert and koeksisters. Or maybe you smaak yourself a lekker spicy bunnychow or how about a heartybowl of isibhede or umngqusho? Thing is, doesn’t matter your particular taste, South Africa certainly has a flavour to suit your palate.

But what are the local flavours for other countries? We took a little travel across the interwebs to see what people around the world like to eat in their home country. We’ve also thrown in some phonetic cues for pronouncing these words. If you want to listen to the phonetic sounds, click here.

This delicious Vietnamese dish, is a noodle soup consisting of broth, linguine-shaped rice noodles, herbs and meat (either beef or chicken). It is a popular street food in Vietnam and is eaten mostly for breakfast or lunch.

French veal ragout is a delectable french dish which is much like a stew, but requires that neither the veal nor the butter be browned in the cooking process – called en blanquette cooking. The meat (usually veal, but lamb or poultry can also be used) is cooked in white stock of water with herbs with a sauce (roux) made from cream and egg yolks.

Russian salad is a traditional dish popular in other European and Middle-Eastern countries. It’s made with diced, boiled potatoes, carrots, dill pickles, green peas, eggs, celeriac, tart apples onions and diced, boiled chicken. The chicken is often replaced with ham or bologna sausage and it is spiced with salt, pepper and mustard before being dressed with mayonnaise.

There are so many foods to choose from when you travel across the US, but one of the dishes which has undoubtedly stuck with us is good old jambalaya. This Louisiana Creole dish has a Spanish and French influence and consists of meat and vegetables mixed with rice. It always includes sausage with some other meats like pork, chicken, crayfish or shrimp and the holy trinity of Cajun cooking – which is onion, celery and bell pepper. It also includes other veg like carrots, tomatoes, chilis and garlic. Everything is cooked in a broth untill the rice is done.

So there’s no surprise here. One of the favourite Australian dishes is without a doubt a shrimp on the barbie. The traditional prawn dish is made by marinating the prawns in your marinade of choice, whether lemon, parsley, garlic, ginger, chili or whichever spice suits your fancy. The prawns are then grilled on the barbecue over a fire.

If you find yourself sitting indoors on a cold and blustery day in England, then there are few things that will warm your soul quite like a Lancashire hotpot. This traditional lamb stew includes lamb (quite obviously), dripping (or butter), lamb kidney, onion, carrot, Worcestershire sauce, bay leaves and potatoes. The peeled and thinly sliced potatoes create a ‘lid’ on top of the pot which crisps up and steams the ingredients inside.

This dish may have originated in Portugal (or Spain, if you ask the Spanish), but the Argentinians have certainly fine-honed the Latin-American spin on it. A party and festival favourite, these pastries are made by filling dough made of wheat flour and drippings with the regional filling of choice, whether beef, chicken, ham, fish, sweetcorn or spinach, including spices like cumin, paprika and other fillings like onion, boiled eggs, olives and raisins. They can be baked or fried.

If you’re going to Germany you’ll probably there’s no way you can miss out on the local favourite – apple pie. Okay, so many people may believe apple pie to be a very American thing, but the Germans have definitely perfected this age-old recipe. The pie filling includes grated apples, raisins, sugar and bread crumbs.

Literally meaning ‘large pan’, the tagine dish can be made of any protein, but usually includes lamb. The ceramic lid is designed in such a fashion so as to provide optimal heat distribution throughout the cooking process. The dish includes spices like saffron, ginger, garlic, paprika and chili as well as ingredients like chopped apricots, tomato paste and honey and is served with couscous or rice.

The Maori hangi is one of the traditional cooking methods in New Zealand. Food is cooked in a hole, and dishes include chicken or seafood and vegetables. It is traditionally found mostly in the central North Island and is a cultural experience of note. You can also try the hangi-steamed pudding for dessert if it suits your palate.

One of the favourite dishes in Serbia and popular in other destinations, this national dish is a main course served with onions, milk cream, relish and spicy cheese salad with a flatbread. It resembles the western hamburger but has a distinct Serbian flavour
We’re sure there are loads of other treats and feasts you can find at your local delicatessen abroad. We’ve found the best treat is to combine these with South African spices and recipes for a true fusion of taste sensations.